AROUND FRIANT AND CALIFORNIA

Arvin-Edison Water Storage District is one of eight California water agencies to receive a U.S. Bureau of Reclamation agricultural water conservation and efficiency grant.
Reclamation announced in early June that Arvin-Edison is being granted $1 million to be applied toward a total project cost of $2 million to undertake a variety of water management activities and improvements.
Included is the Pilot In-lieu Project.
It includes construction of a pipeline network to and from Arvin-Edison’s South Canal to provide surface water supply during supplemental/ample water years to landowners who normally pump groundwater to meet crop demand and plumb landowner wells to the district for increased extraction capability during deficit water supply years.
Steps will also be taken to modernize and make capacity improvements to the district’s Sycamore Check Structure and improve water management for the south half of the district as well as provide long-term future water supply benefits to the district.
The proposed project is estimated to achieve water savings of 14,203 acre-feet.
The total program is bringing $6.3 million in grant money to California.
The grants are part of a partnership with the Natural Resources Conservation Service. It promotes district-level water conservation improvements for on-farm water use efficiency and conservation benefits.
“The situation in California is critical and requires a swift and effective response at all levels of government,” said Bureau of Reclamation Regional Director David Murillo.
Other valley agencies receiving grants were the Buena Vista Water Storage District, Cawelo Water District, Central California Irrigation District, Firebaugh Canal Water District and North Kern Water Storage District. 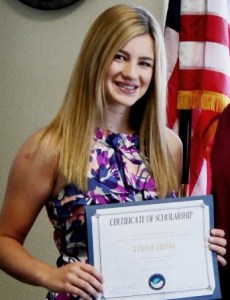 Sydnie Sousa is the 2014 recipient of the Lower Tule River and Pixley Water Resources Scholarship.
The scholarship of $5,000 is awarded annually to a student, or students within Tulare County who pursue educational goals and careers intended to contribute to farming, dairying or irrigated agriculture.
Sydnie is a graduate of Tulare Western High School and plans to attend the University of San Diego where she will study pre-law with an emphasis on water policy. She has been actively involved in FFA, Sports and local church activities.
Sydnie is the daughter of Carl and Shelly Souza

A Tulare County drought task force has been organized informally by Tulare County, its eight cities and a number of non-profit agencies.
Andrew Lockman, Tulare County’s Emergency Services Manager, was quoted by the Visalia Times-Delta as saying, “We’re cutting across disciplines and across jurisdictions. We’re trying to make sure everybody involved is aware of all the various impacts and needs of the community.”
The task force’s goal is to coordinate resources and collaborate on drought relief.
Along with food, the task force is working on drought-related housing and water issues (particularly for those with bad wells).
Services may change as the drought continues.

Another Agency Joining The Fray

There are already dozens of federal, state, regional and local agencies dealing with the troubled Sacramento-San Joaquin Delta, and now the U.S. Department of Agriculture has joined in.
USDA has named the Delta watershed as a “critical conservation area” under a Regional Conservation Partnership Program established under the recently passed 2014 Farm Bill.
There are eight such conservation areas nationwide. The Delta is the only one that lies entirely within a single state’s boundaries.
The program aims to match $1.2 billion in federal funding, over five years, with matching funds from other partners to expand the effectiveness of conservation programs. Partners can include private companies, nonprofits, universities, Indian tribes and local governments.
Eligible programs will include those that address water conservation, water quality and wildlife habitat – particularly those that help salmon and other so-called anadromous fish.

High Court Gets Case On Tunnels

California Supreme Court justices will rule in a case in which they must decide whether the state has to purchase several thousand private acres to perform underground core tests.
About 150 property owners have refused to grant the state access to their Delta properties for geological drilling and other environmental tests to determine whether the routing of the Delta’s proposed twin tunnels is feasible.
An appeals court ruled earlier this year state representatives could not enter properties without permission. The state is attempting to avoid eminent domain processes that could result in more property being acquired than might be needed.