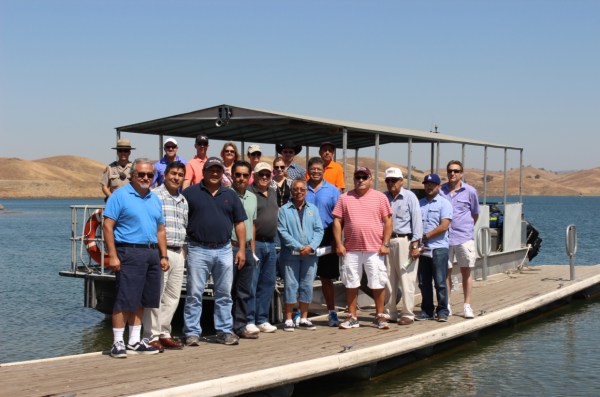 With the end of summer in sight and the water year starting to wind down, the Friant Division’s current water operations and supply have a feel of a team playing out the schedule and hoping for better things next year.
Friant’s declared allocation from the U.S. Bureau of Reclamation continues to be 62% of contract amounts for Class 1 contractors with no Class 2 water available due to this year’s dry conditions.
Millerton Lake storage at midnight August 15 was 310,535 acre-feet, just under 60% of the San Joaquin River reservoir’s capacity. Storage during August has been dropping between 1,000-4,700 acre-feet a day.
Releases to the Friant-Kern and Madera canals have been declining slowly as demands decrease. As of August 15, the Friant-Kern Canal release was 1,926 cubic feet per second, slightly less than it has averaged since August began. Madera Canal demands have declined sharply and were .down to 244 c.f.s.
The August 15 river release from Friant Dam to meet pumping demands and interim restoration flow requirements was 355 c.f.s., about what it has been throughout August.
Klamath Release
Ban Is Extended
Special Trinity River water releases into the lower Klamath River by the Interior Department and U.S. Bureau of Reclamation continue to be blocked by a Fresno judge’s now-extended temporary restraining order.
A hearing was to be held (after press time) before Judge Lawrence J. O’Neill. However, O’Neill extended the order to run through August 26. It had been scheduled to expire August 16.
The federal agencies were ordered to show why the temporary restraining order should not be converted into a preliminary injunction.
Westlands Water District and the San Luis and Delta-Mendota Water Authority brought suit against Reclamation, contending supplemental water releases from a Central Valley Project reservoir into the Klamath system would be unlawful and would decrease water availability for farmers from the CVP’s Delta-Mendota Canal in 2014.
SAN DIEGO COUNTY
Farm-To-City
Transfer OK’d
A Sacramento Superior Court judge has approved the nation’s largest farm-to-city water transfer by signing off on an order that appears to end a dispute on how California should divide its share of Colorado River water.
A 2003 agreement between the Imperial Irrigation District and the San Diego County Water Authority was accepted by the court.
Environmental community members, the government and some growers challenged the agreement. Among their arguments were claims the transfer would accelerate deterioration of the Salton Sea.