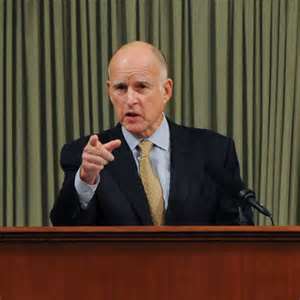 Governor Brown, speaking to the Legislature

Governor Brown used his State of the State address to reiterate his support for the Bay Delta Conservation Plan and its through-Delta conveyance proposals and talk about costs.
“My proposed plan is two tunnels, 30 miles long and 40 feet wide, designed to improve the ecology of the Delta, with almost 100 square miles of habitat restoration,” Brown told a joint Legislative session.
“Yes, that’s big, but so is the problem.” The BDCP is to result in meeting co-equal goals of improved water supply and ecosystem resources with a great deal of emphasis on infrastructure. The tunnels are intended to be paid for by supply beneficiaries.

“Central to the life of our state is water, and one-sixth of that water flows through the San Joaquin Delta,” Brown said. “If because of an earthquake, a hundred year storm or sea level rise, the Delta fails, the disaster would be comparable to Hurricane Katrina or Superstorm Sandy – losses of at least $100 billion and 40,000 jobs. I am going to do whatever I can to make sure that does not happen.”
Mike Wade, California Farm Water Coalition Executive Director, applauded Brown’s “continued commitment to securing a reliable water future for California through the Bay Delta Conservation Plan” and added, “The risk is too great to not move forward with the Bay Delta Conservation Plan.”
Association of California Water Agencies Executive Director Timothy Quinn said Brown’s focus on water is welcome and essential. “The Bay Delta Conservation Plan process mentioned by the Governor may be our best opportunity to put California on a path to retool our water system for the 21st century.”