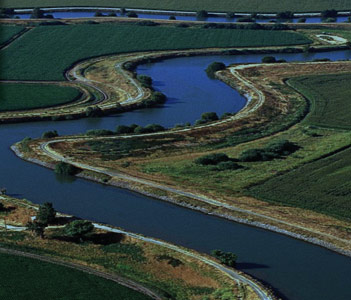 One of many channels snakes its way through the Delta.

It did not take long for the Delta Stewardship Council’s long-debated plan for the Delta to come under legal fire. A petition for a writ of mandate was filed by the Westlands Water District and San Luis and Delta-Mendota Water Authority in Sacramento Superior Court seeking to require the Stewardship Council to revise the plan.
The agencies, which represent growers whose farms depend upon Central Valley Project water pumped from the Delta, contended the plan does not achieve co-equal goals mandated by state law.
A Westlands statement said the action was filed “to be consistent with the 2009 Delta Reform Act.”
Dan Nelson, Executive Director of the Water Authority, said, “The Delta Plan exceeds the authority granted by the Legislature when it passed the Delta Reform Act in 2009.”
The Stewardship Council was charged with creating a legally enforceable plan that includes policies and regulations to guide state and local agency actions on water use and the Delta environment. The Bay Delta Conservation Plan is among those policies.

He added, “Instead of serving the role as a facilitator or collaborator with over 200 other state agencies with a policy role touching the Delta, the Delta Stewardship Council has made itself the 201st regulatory agency, which creates obstacles rather than pathways to achieving the co-equal goals of providing a more reliable water supply for California and protecting, restoring and enhancing the Delta ecosystem.”
Nelson also charged the Delta plan’s programmatic environmental impact report is “inadequate.”
The Stewardship Council unanimously approved the Delta plan and its programmatic environmental impact report on May 16.
A day later, it adopted the plan’s regulations.