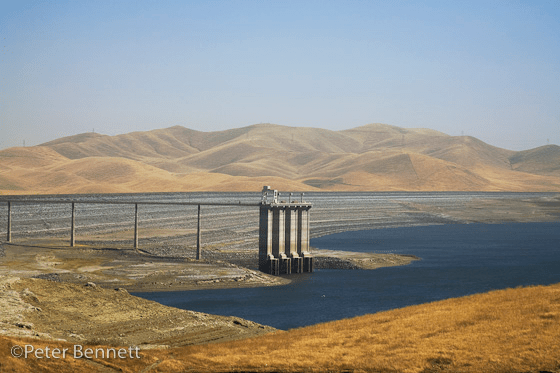 B.F. Sisk-San Luis Dam — Could it be bigger?

There have been lots of ideas for easing California’s water crisis and particularly Central Valley Project supply hits being taken in parts of the San Joaquin Valley but few in attendance at the recent Delta Water Summit in Fresno anticipated a potential project made public by Commissioner of Reclamation Michael Connor.
Connor announced that the U.S. Bureau of Reclamation is “looking at San Luis Reservoir and increasing storage there. We need to put everything on the table.”

The Commissioner, who made the announcement near the end of his portion of a panel discussion on Delta water issues and needs, said costs are being investigated.
After the panel was completed, Connor told reporters, “We’ve done an appraisal level analysis but we need to do more modeling.” He said a preliminary report is due October 1. If favorable, a feasibility study could follow.
Connor provided no details, including the amount of additional dam height and storage that could be added, but it did surprise many in the Delta Summit audience.

Ronald D. Jacobsma, Friant Water Authority General Manager, said the analysis was undertaken as part of a dam-safety study when engineers found that strengthening of the dam could permit an increase in its height.
San Luis Reservoir, located in western Merced County and built a half century ago, is a joint federal-state facility capable of storing a little over 2 million acre-feet of water. The Central Valley Project’s maximum storage share is 980,000 acre-feet. The reservoir currently holds about 350,000 acre-feet.
It is crucial to State Water Project and CVP operations in meeting water supply needs south of the Delta, including deliveries of water used within the Friant Division by eight agencies along the Friant-Kern Canal with CVP contracts for Cross Valley Canal water deliveries.

Friant’s basic CVP water supply comes from the San Joaquin River at Friant Dam but Friant has another crucial link to the Delta in which San Luis Reservoir storage can play a role.
The San Joaquin River Exchange Contractors – the river’s historic water rights holders – receive a substitute supply of water exported from the Delta and sent to San Luis and on to Mendota Pool for delivery.
In exchange, Friant is permitted to divert water that the four agencies now known as the Exchange Contractors and their predecessor, the cattle firm of Miller and Lux, previously diverted directly from the river.