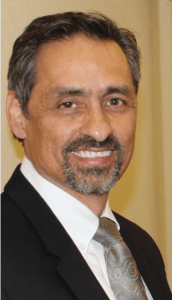 David Murillo, the U.S. Bureau of Reclamation’s new Mid-Pacific Regional Director, is a man interested in results.
Murillo met March 28 with Friant Water Authority directors at their monthly meeting in Visalia and made it clear that in an era of federal belt-tightening he wants to see Reclamation projects and activities cross the finish line.
“I go to lots of meetings and I want to know what the outcome is going to be,” Murillo said. “I’m asking people, ‘When do we get to the end’ [of programs and milestones].”

As an example, Murillo cited one of the Mid-Pacific Region’s biggest responsibilities, the San Joaquin River Restoration Program.
That program is the federal implementing arm of the San Joaquin River Settlement that resolved litigation between a coalition of environmental and commercial fishing plaintiffs on one hand and the federal government and most Friant contractors on the other.
“We need to look at what we really need to be done,” Murillo said. “I’ve asked what are we going to complete this year and what is it going to cost and what are we going to complete next year and what is it going to cost? It gives us focus.”
Reclamation and the Restoration Program have thus far spent approximately $100 million but have yet to begin any channel or environmental construction for the habitat improvements needed to fully implement the program’s Restoration Goal, bringing salmon back to the river below Friant Dam. Federal officials believe a total of $800 million remains for implementation and have scoped out projects and activities for that amount.

“You may have $800 million but that doesn’t mean you’ll get that much,” Murillo cautioned, pointing out that Congress has yet to act on appropriations bills needed for implementation. He acknowledged that the Restoration Program to some extent has been going through money for planning and studies “like we really have $800 million.”
In response to suggestions that the environmental community wish list for river Restoration appears to be far greater, Murillo said, “Let’s figure out what we can do with the dollars we have.”
Friant officials pointed out they continue to stress the need for the program’s Water Management Goal funding for projects, activities and management necessary to return a potion of the water contributed for river Restoration to Friant districts and their users.

Asked about a recent slowdown in progress on a feasibility study being conducted on the proposed Temperance Flat Reservoir above Millerton Lake, Murillo said, “Once again I’m asking when we can come to closure on these studies.” The study is part of the Upper San Joaquin Basin Storage Investigation.
He noted that funding is a problem for federal and state agencies involved in storage studies.
“We can delay these but if you delay them it’s still costing money,” Murillo said. Funding availability for nearly all Bureau activities is likely to decrease next year, he said.
Friant officials expressed concern over the timing of completion of the feasibility study and the potential for negative effects on a major potential funding source, the proposed state water infrastructure bond.
The federal budget sequester that took place, with automatic spending cuts imposed, earlier this year is impacting Reclamation, said Murillo.
“We are taking this sequestration seriously, he said. “There are contracts that are not being awarded. We are restricting travel. We’re looking at training. Awards are being postponed.”
The Mid-Pacific Region is approximately 100 people short of authorized staffing levels through attrition. “We’re not looking at furloughs right now but that doesn’t mean we won’t have any next year,” said Murillo.

The Regional Director said the Mid-Pacific Region is the most difficult to manage of any in the 17 Western states served by Reclamation because of its vast array of projects and issues.
Murillo, who has had many assignments for Reclamation, had been serving high in the Commissioner’s office as a deputy.
“This is the only Regional Director position I would take,” he said. “In my previous position, I had overseen all of the regional directors.”
“We provide a service,” he said. “We have a relationship with water and power users, and we need to build on it.”