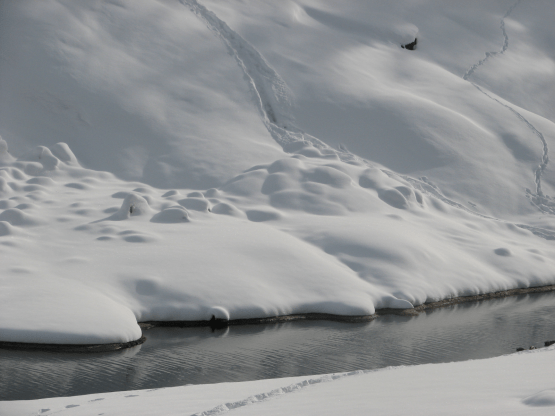 Snow blankets the shore of Shaver Lake after a series of Christmas holiday season storms boosted snowpack conditions to slightly above average, well above what was on the ground a year ago.

It is too early to tell how this year’s water outlook will shape up but a series of December storms have given a promising start to the southern Sierra Nevada snowpack, resulting in modestly above-average conditions as the midway point in the snow accumulation season nears.

Storms leading up to and continuing through the holiday season were not massive but fairly steady, and more productive over the mountains than in much of the valley south of the Fresno area. A big portion of the snow now blanketing the mountains fell during Christmas week.

The San Joaquin River watershed’s first seasonal snow survey, taken during the last week in December by Southern California Edison Company, was limited to five locations but showed snowpack water contents to be averaging 137% of what is considered normal on January 1 and 48% of the April 1 average.

April 1 is the date upon which snow conditions typically reach maximum levels.

Even though conditions turned dry and cold during New Year’s week, the amount of snow on the ground is far greater than totals a year ago. A new storm was forecast by January 6 (after press time).

Most impressive were totals measured in Pioneer Basin at the 10,400 feet elevation. There, the snow depth was 67.8 inches with 18.1 inches of water content.

A year earlier, only 10.9 inches were on the ground and the water content was just 2.8 inches. Similar improvements over year-before readings were found on other snow courses as well as automated snow sensors. San Joaquin River unimpaired runoff during the 2011-12 water year – as if there were no dams – was only 45% of average.

“It’s a good start but we need to remember that half of the primary precipitation season remains,” said Friant Water Authority General Manager Ronald D. Jacobsma. “We have a long way to go.”

The U.S. Bureau of Reclamation is expected to make preliminary forecasts of Central Valley Project water supplies later in January at a water users conference in Reno, Nevada, but its first official supply declarations will not be posted until mid-February. Reclamation’s new contract year for CVP users begins March 1.

The amount of water currently stored in San Joaquin River reservoirs is fairly typical for mid-winter.

Millerton Lake behind Friant Dam has the most water – nearly 303,000 acre-feet, or 58% of capacity – in the system of reservoirs. Millerton’s storage is steady.

Upstream hydroelectric reservoirs contain nearly 612,000 acre-feet, 35% of capacity. The San Joaquin River’s calculated natural flow at Friant on January 2 was 366 c.f.s. That is nearly identical to the actual Millerton Lake inflow and the release being made into the San Joaquin River. No water is being released into the Madera or Friant-Kern canals.