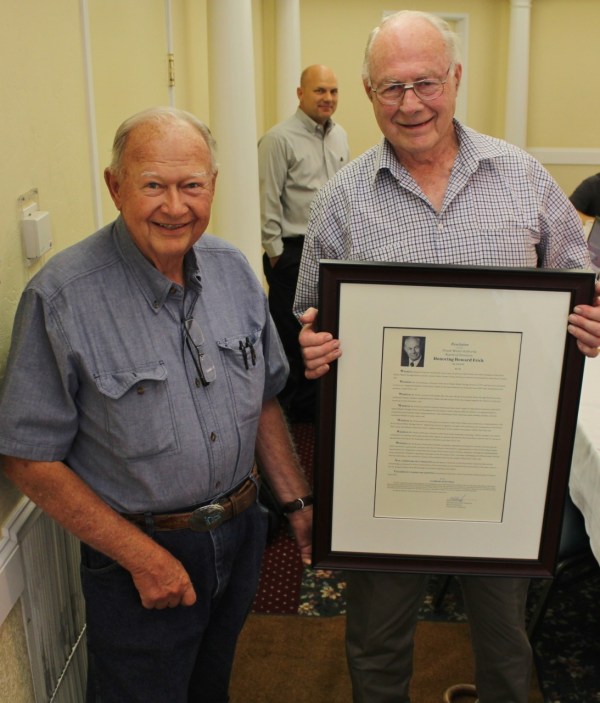 Friant Board Presents Resolution For Service

Howard Frick, who has been carrying on his family’s agricultural and water service traditions for decades, has been honored for those accomplishments by the Friant Water Authority Board of Directors.
Frick ended his lengthy service on Friant water boards in April when he retired as Arvin-Edison Water Storage District President. He continues to serve on Arvin-Edison’s board.

His former Friant Water Authority board colleagues welcomed Frick back to their table in Visalia at a June 27 meeting and gave unanimous consent to a resolution of commendation that recognized his many accomplishments and long tenure.
“It’s been a real pleasure to work with you,” Frick said in thanking the board. “This organization has done a great job over the years and has been very effective.”
“Mr. Frick has worked tirelessly toward assuring a water supply for agricultural interests in the Arvin-Edison Water Storage District and throughout the San Joaquin Valley,” the resolution states, “helping make the district a recognized leader in conjunctive use of surface water and groundwater, and establishing vitally important water banking facilities, all to the enormous benefit of water users.”

In 1997, Frick took a leading role in Arvin-Edison’s implementation of a 25-year water management program with the Metropolitan Water District of Southern California in which the district agreed to bank approximately 250,000 AF of MWD’s State Water Project supply and return the banked water in years of deficiencies.
Nearly $25 million in new water banking facilities were constructed. Those included new spreading basins, groundwater extraction wells, and a bi-directional pipeline connecting Arvin-Edison’s canal with the California Aqueduct.
The resolution also cites Frick’s role as a Friant director “during the negotiations of long-term renewal contracts and the 2010 conversion to permanent contracts with the U.S. Bureau of Reclamation, implementation of the Central Valley Project Improvement Act, negotiation of Bay-Delta San Joaquin River water quality and flow standards, framing and implementation of the Settlement of litigation regarding restoration of the San Joaquin River, and other challenging and difficult issues, and has lent his leadership to the resolution of many of the problems faced by San Joaquin Valley water users.”

Born and raised in the Arvin and Lamont areas of Kern County, Frick is a second generation farmer who followed in the footsteps of his father, the late Forrest Frick.
The elder Frick helped organize the Arvin-Edison Water Storage District in 1942 and became its first President. The district was established on a concept, unique at that time, of conjunctively managing highly erratic surface water supplies with groundwater supplies.
Howard Frick began farming in southern Kern County more than 47 years ago after earning a bachelor of science degree at the University of California, Davis. He served four years in the Air Force. With his two sons, he has grown potatoes, onions, garlic, grapes, tomatoes, carrots, apples and cotton.
He is an elder statesman on Kern County water matters.
Frick became involved in the policy-making end of California water management and issues in 1967 when he joined the Kern Delta Water District board, serving as its President from December 1987 to March 1999.
In 1973, he became an Arvin-Edison board member and was elected the district’s President in 1987. Frick chaired the Arvin-Edison board 26 years.
Frick is also a past member of the Kern County Water Resources Committee in an advisory position to the Kern County Board of Supervisors.

The resolution notes Mr. Frick served as a Friant Water Users Authority director, “beginning a tenure of regional oversight of the operation and maintenance of the Friant-Kern Canal and delivery of precious water supplies along much of the southern San Joaquin Valley’s East Side.”
In 2004, Frick was among the founders of the Friant Water Authority, becoming a charter board member in creating what was determined to be a more appropriate public agency to operate and maintain the Friant-Kern Canal for the U.S. Bureau of Reclamation.
He also has been active in Friant and Arvin-Edison committees as well as the Association of California Water Agencies, Bay-Delta Advisory Committee, Central Valley Project Water Association and Southern California Water Committee.
In other civic and agricultural organizations, Frick has been on the Vineland School District Board of Trustees (of which he is a Past President), Western Growers Association and Kern County Farm Bureau (of which he is a Past President), and National Potato Promotional Board.