West Side Reels From CVP Cutback

While the Sierra Nevada’s diminishing snowpack and taking a toll on the Friant Division’s supply, the tiny Delta smelt continues to do a number on the amount of water available to Central Valley Project users along the San Joaquin Valley’s West Side.
That number is now 20% availability of CVP supplies to contractors in the San Luis Unit and districts – except the San Joaquin River Exchange Contractors – along the Delta-Mendota Canal.

The decrease from an already paltry initial CVP water supply declaration for south-of-Delta users was announced March 22 by the U.S. Bureau of Reclamation and immediately sent shock waves through the West Side’s agricultural communities.
Reclamation officials blamed the latest decrease on extraordinarily dry late winter conditions in Northern California, including the Sacramento River watershed that supplies the primary north state CVP reservoir, Lake Shasta.
The Exchange Contractors, because of their historic San Joaquin River water rights, will receive 100% of their substitute supply of Delta water. Those Delta diversions make possible use of San Joaquin River water in the CVP’s Friant Division

Water agency and political leaders in the valley were quick to point out that an additional and significant culprit was a decision by federal regulators in December and January.
They ordered Delta water export pumps to be mostly turned off to protect the Delta smelt under a controversial Endangered Species Act biological opinion during a period in which the Delta was having its only high natural flows after fairly big storm events in November and December.
As a result, more than 800,000 acre-feet of north state water that might have been captured, sent south and stored in San Luis Reservoir for later beneficial use in Central and Southern California as well as portions of the San Francisco Bay Area was allowed to flow into the ocean.
“We understand that the most recent cut imposed by Reclamation is a result of record dry conditions experienced in January, February and March but this reduction is being imposed after the loss of hundreds of thousands of acre-feet of water experienced during a record wet December,” said Thomas Birmingham, General Manager of Westlands Water District. “Those losses are difficult to comprehend.”

Birmingham said this spring’s diminishing water declaration “will devastate the local communities.”
He added, “Once again, the needs of our community and the livelihood of our workers are being sacrificed due to questionable decisions by federal officials to protect Delta smelt.
“We must put an end to project operations that fail to capture water when it is available, only to see a record dry period that further devastates communities that rely on irrigated agriculture for their existence.
“The laws that were designed to protect fish and provide some reasonable balance between the needs of fish and people for water have failed. Something must be done to correct these failures.”

Representative Jim Costa (D-Fresno) told the Fresno Bee that the cut “is like changing the rules for a game after the first quarter of play.”
He said the Obama administration “is headed in the wrong direction on this one. They must use every ounce of flexibility available to keep water flowing to our valley.
“A 25% allocation was unacceptable, but 20% is simply devastating,” said Costa.
Senator Dianne Feinstein (D-California) called it “a crippling blow to California’s farm community” and called on Reclamation, state officials and federal contractors to find a means of increasing the supply as was accomplished in 2010.
The Bureau’s Mid-Pacific Regional Director, David Murillo, said the agency is “exploring all options to assist in alleviating the serious impacts of these drought conditions.” 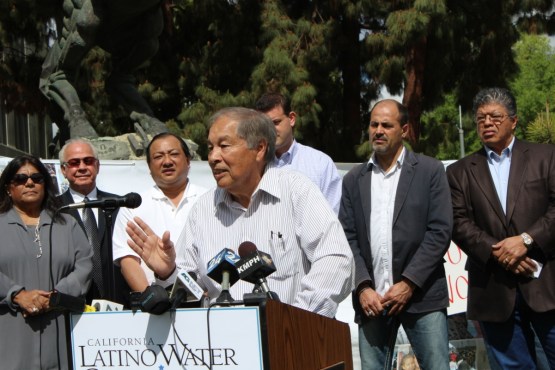 Mendota Mayor Robert Silva joins other elected officials who are members of the California Latino Water Coalition April 1 in voicing concerns about the West Side’s water supply cutbacks during a well-covered Fresno news conference. Also speaking were Reps. Jim Costa and David Valadao, Supervisors Phil Larson of Fresno County and Richard Valle of Kings County, along with Clovis City Council Member and former Mayor Jose Flores. Silva spoke about the Bureau of Reclamation’s recent reduction in the West Side’s water supply from 25% to 20% and said, “Do we want more welfare, more food stamps, more unemployment? No. We want the 5% back, plus 10% more.”