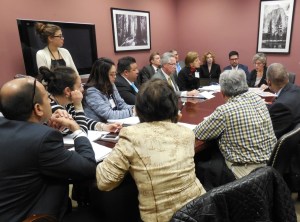 On the Hill
Members of Fresno County’s “One Voice” delegation to Washington meet with Senator Barbara Boxer (SECOND FROM RIGHT) in the U.S. Capitol. The valley’s water crisis was among the issues discussed. Many other members of Congress and the administration were visited. Friant Water Authority Assistant General Manager Mario Santoyo took part.

What Friant Wants
In Drought Measure

The Friant Water Authority has provided specifics of what the Friant family does and does not support as a House-Senate conference labors to iron out extensive differences in California drought legislation.

Authority Chairman Harvey Bailey told lawmakers in a letter, “Both short-term and long-term solutions are required to restore balance in meeting needs of the environment, our farms and our communities. As this year clearly demonstrates, balance is missing.”

Bailey noted Friant is facing an “unprecedented situation in which the 15,000 small family farms of the Friant Division are without a surface water supply for the first time since construction of the Central Valley Project (CVP) more than 60 years ago.”

On May 22, the Senate unanimously approved S. 2198, a California drought-relief bill sponsored by Senator Dianne Feinstein (D-CALIFORNIA). Earlier, the House approved H.R. 3964 by Representative David Valadao (R-HANFORD) that is significantly different from the Senate bill.

Friant’s four broad objectives in the legislation include:

Friant agrees with the House bill to provide Delta export stability and certainty by directing that if the state and federal projects comply with the Bay-Delta Accord, they will have complied with the ESA.

The FWA proposed a limited scope pilot project that would be deemed to satisfy the ESA with a fixed time period based on scientific factors such as hydrologic cycles and migratory fish returns. The program would follow natural conditions with fish flows capped at a predetermined percentage of total volume, which would vary with the type of water year.

“The San Joaquin River Settlement commits Friant to a contractual obligation to comply with terms of the Settlement,” Bailey wrote. “We never liked the idea of having to put our water down the San Joaquin River and are now very concerned about the viability of the project given the lack of adequate funding, inaccurate cost estimates, technical problems and the agencies’ inability to comply with the Settlement’s overly optimistic target dates.”

However, because of the Settlement’s terms and conditions, Friant cannot agree to any repeal or unilateral Settlement Act changes, which the House bill proposes, without agreement of all Settling Parties. Those also include the plaintiffs in the 18-year San Joaquin River litigation – an environmental and commercial fishing coalition headed by the Natural Resources Defense Council – and the United States .

The Authority pointed out that as written, House bill provisions could in some years lead to water supply losses to Friant users greater than those under the Settlement.

FWA said that with so little CVP water being delivered this year, the $45 million in project O&M costs “will be borne by a small number of CVP agricultural water users” with the potential of crippling districts and farmers alike with stifling costs on top of all other drought effects.

Noting that the state’s water supply system has become inadequate, the FWA says a broad solution is not to be found in “improvements in conservation, water reuse and groundwater management, or even more rational application of environmental laws.” More storage is needed.