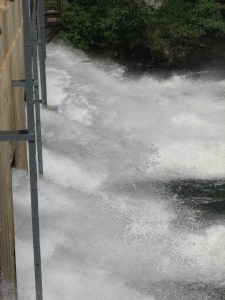 Completing a fall of 1,900 feet from Huntington Lake, power-generating water roars from the powerhouse at Big Creek.

For 100 years, San Joaquin River and tributary flows that now find their way to beneficial Friant Division uses have been the world’s hardest working water, generating power in what was the nation’s first major integrated hydroelectric project.
Southern California Edison Company’s Big Creek Project turned 100 last month with a celebration in Big Creek, the scenic mountain town that an Edison predecessor company founded when work began.
Big Creek No. 1, the stately powerhouse that towers over the confluence of Big and Pitman creeks in northeastern Fresno County, began generating water-powered electricity for use in Southern California a century ago.
Its opening was part of the project’s initial development that included creation of Huntington Lake as the water source, tunnels, plunging penstocks, two other small dams and Powerhouse No. 2, five miles to the west and 2,000 feet lower.
Since 1913 when initial construction was completed (in only three years), the project has grown. It includes Florence, Edison, Shaver and Redinger lakes, Mammoth Pool, several smaller reservoirs, seven additional power plants and a landmark recreational community.
The system provides water storage and flood control that ultimately benefits downstream stakeholders, including Friant water users, while providing electricity for 650,000 homes in the southern San Joaquin Valley and Southern California.
The Big Creek project was conceived by John Eastwood, a well-known valley engineer in the late 19th and early 20th centuries. Eastwood surveyed the San Joaquin River region of the Sierra Nevada and conceived the project at a time when few understood what hydroelectric power generation was all about. 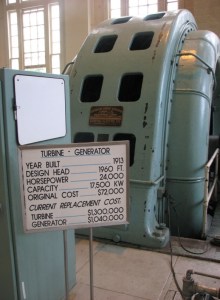 One of the original 1913 turbine-generator units still in service in the Big Creek No. 1 powerhouse.

“What started in the imagination of one person has become a historical marvel, and has helped power the lives of countless Edison customers,” Ron Litzinger, SCE President, said.
The impetus for building Big Creek by the Pacific Light and Power Corporation came from California industrialist Henry Huntington. SCE took over the project in 1917.

The Lower Tule River and Pixley irrigation districts in Tulare County are conducting their annual holiday season food and coat drive.
Donations are being accepted through Christmas at the districts’ office, 357 East Olive Avenue, Tipton.
All types of non-perishable food and household items are being sought.
To learn more, call (559) 752-5050.

Growers have received mailed instructions and a registration personal identification number to be able to make use of the system.

A $6.89 million grant from the California Department of Water Resources is helping improve facilities that aid in preventing flooding in the Fresno area.

The Fresno Metropolitan Flood Control District said the projects are to take place in the Big Dry Creek and Pup Creek watersheds east of Fresno.

Structural integrity of the Big Dry Creek Dam is to be improved and downstream channel work will take place.

A floodwater detention basin is to be built and an existing basin will be expanded to boost capacity, increase groundwater recharge and improve groundwater quality.

Two members of the Central California Regional Water Quality Control Board have been reappointed by Governor Brown.

They are Dr. Karl Longley of Fresno and Carmen Ramirez of Merced.

Dr. Longley, 76, of Fresno, chairs the panel and has been a board member in all but two of the past 24 years. He  has been water resources coordinator at Fresno State’s California Water Institute since 2005 and held multiple positions at the university’s College of Engineering since 1982, .