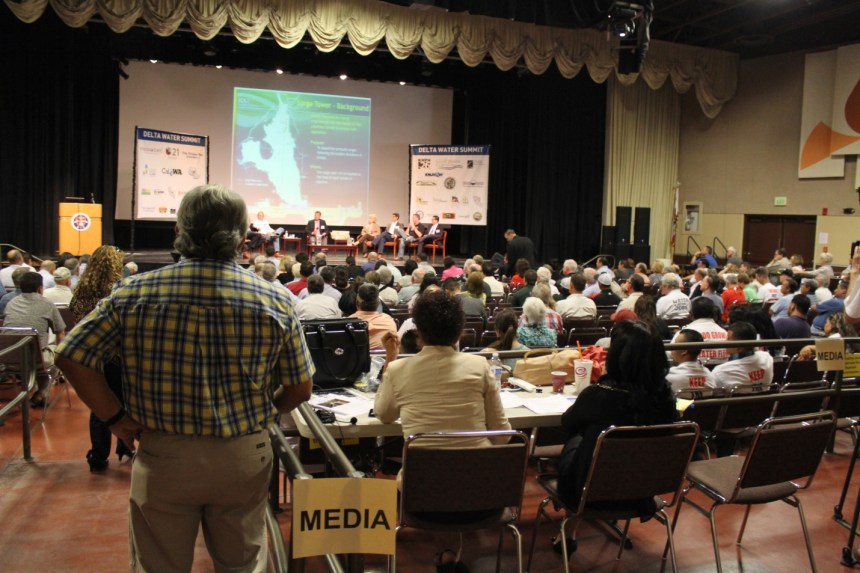 Looking over the audience of 700 and listening to a panel of state and federal elected officials during the Delta Water Summit in Fresno State’s Satellite Student Union is Mario Santoyo (left), Friant Water Authority Assistant General Manager and California Latino Water Coalition Executive Director. Santoyo was among the event’s principal organizers.

There are all sorts of issues and problems surrounding the troubled Sacramento-San Joaquin Bay-Delta Estuary but one speaker after another – and quite a few in the Delta Water Summit audience of 700 – focused on the need for more water, including a water bond that includes above-ground storage.

An audience of 700 attended the August 3 event at California State University, Fresno’s Satellite Student Union and frequently applauded comments (or made their own in lieu of asking questions) about problems and possible resolutions of the valley’s water supply shortfall, much of which is directly related to Delta water export supply restrictions in place to protect endangered species.

One major potential but highly controversial remedy is the Bay-Delta Conservation Plan and a proposal to build a 30-mile twin-water conveyance tunnel system to bypass the Delta and its fragile environment and infrastructure. Although it was discussed at length, there seemed to be more interest in developing new water storage. 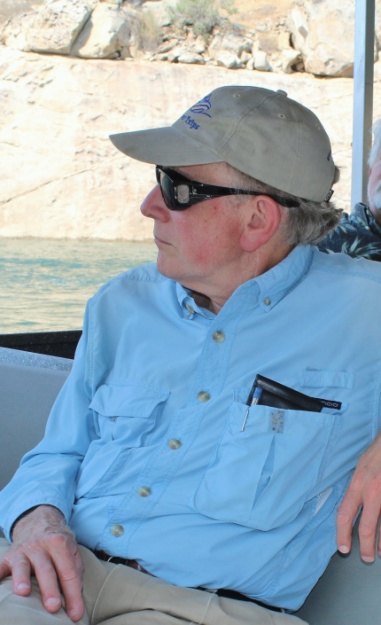 Dr. Gerald Meral, the state’s Deputy Resources Secretary, presented an overview of the BDCP. “The idea was to develop a plan to meet the needs of the species, the Endangered Species Act and water users,” he said.

However, Meral arrived in Fresno a day early to join Friant Water Authority, U.S. Bureau of Reclamation and other officials on a Millerton Lake State Park informational boat tour to the proposed site of Temperance Flat Dam, about four miles upstream from Friant Dam.

Assembly Member Henry T. Perea (D-Fresno), was among those stressing that he wants the water bond that is now in the process of being legislatively recrafted to contain money for surface storage as well as Delta fixes and water quality solutions.

“This is not going to be a Democrat-Republican fight,” Perea said. “It’s going to be a regional fight… . It is critical for everyone in this room to engage in the water bond with a balanced approach. There are going to be lots of opportunities for partisan issues. Water is not one of them.”

Gloria Gray, a Delta Stewardship Council member and framer of that agency’s own controversial Delta Plan, said the council “recognizes the importance of surface storage. In our Delta plan we have asked for a quick study and recommendation to create storage.”

That, he said, includes “taking advantage of the flood flows that we can periodically get — when they come they come big like in 2010 and 2011 when we got close to nearly one million acre feet. The last two years we’ve been at 40% of average supply. We could have really used that water.”

Jacobsma added, “The problem is that the low hanging fruit has already been built. We manage 1.8 million acre feet more with a 520,000-acre foot reservoir. So what we’re looking at doing is how to pull additional yield out of that project.

“If you build a million plus acre feet reservoir [Temperance Flat is proposed to be 1.2 million acre-feet], the yield is about 150,000 acre feet. That is a key water supply. That’s about what we’re committing to the environment through our Restoration Program, or soon will be. If you take $2-3 billion off that cost for agriculture, it just doesn’t work by itself. But if you can get the Delta reliability back so when we’re moving vast amounts of wet year water, it would run out of storage south of the Delta.

“In the case of Temperance Flat, there is a way to integrate that storage facility through groundwater exchanges. This could potentially double the yield, provide greater flexibility, and provide water quality to urban agencies. Suddenly, this ‘big gulp, little sip’ concept would work a lot better. If you can’t take advantage of your wet year flows, you’re not going overall get the same level of water supplies that we’ve become dependent on.”

Thomas Birmingham, General Manager of the Westlands Water District, pointed out that growers, farm workers, entire communities and numerous businesses have and continued to suffer from Delta water curtailments under the Endangered Species Act.

“You wind up putting people in a food line to protect a fish [the Delta smelt] no bigger than my little finger,” he said.

Birmingham said Central Valley Project and State Water Project development and operations have helped the Delta, where the twin tunnels would be built and where opposition to the BDCP is fierce, by helping repulse salt water intrusion and otherwise improve water quality.

Regarding Delta tunnel opponents’ concerns that the underground conveyance would damage or reduce Delta availability, Birmingham said, “The State Water Resources Control Board will establish minimum amount flow requirements and minimum amount bypass requirements for the operators of the tunnels. But there is a great deal of debate about the necessity of having certain outflows in order to conserve or recover that at risk species. … To suggest that a 30% reliable supply should be sufficient ignores reality.”

He said the Legislature in 2009, by enacting the Delta Reform Act in 2009, decreed that enough water is to be provided to reasonable and beneficial use needs. “That is a concept of adequacy that a lot of people want to ignore,” Birmingham said.

“When the BDCP first started it looked at only the flow aspects in the Delta,” Walthall said. “I quickly learned there are a lot of stressors in the Delta. We don’t handle them well or at all. I think the reason is the regulatory agencies are charged with enforcing the Endangered Species Act on a project-by-project basis. They don’t get to look at the eco-system as a whole, then decide what’s wrong.”

He said the BDCP has identified 22 Delta stressors, “only one of which is the pumps… . As we start to examine those other stressors, we’re learning they are quite important. For example, one is predation of non-native fish on native species, and particularly, the bass species on Delta smelt and out-migrating salmon.” He said up to 90% of out migrating salmon “are lost to predation.”

John Coleman, Association of California Water Agencies Vice President, called the BDCP “an evolving process. We want to make sure it is successful. We’re monitoring it. We’ll be making comments on it. We realize to be successful, is success for the entire state. That’s our approach. We want to make sure it works for the entire state and everyone benefits.” He also said that with the BDCP, “Storage has to be part of the equation. You can’t separate the BDCP and storage.”

Sunne McPeak of the Delta Vision Foundation and a key opponent said she helped defeat the Peripheral Canal in 1982 because it lacked commitment to build new surface water storage facilities. “If we do not have the guts and commitment to build facilities to store that surplus [from flood events] … then shame on us.” McPeak said that inaction is placing a $2 trillion California economy at risk.

“What is being proposed now is nothing like the Peripheral Canal. Let’s not waste any more time.”

Rep. Jim Costa (D-Fresno) said, “We absolutely have to come together” on water. He said legislation is needed to create water reliability but to achieve it political support must be built in Southern California and the Bay Area.

On the state of California’s water needs and issues, Costa asked, “Do you know what we’ve done best over the last 30 years? Nothing. If we don’t bring the different regions together to understand one another, we’re living on borrowed time.”

Chris Acree, Executive Director of Revive the San Joaquin and the environmental community representative on the program, contended that “pumping has increased all the way through the 1980s until today. In 1992, the State Board said there were safe Delta levels of fresh water at about 2.5-3 million acre feet a year of exports. We’re already up to 5-10 million acre-feet.

“This Bay Delta twin tunnel project is basically trying to enshrine that level of pumping. I don’t think it necessarily will make anything worse. It would just keep us on the current trajectory to make all the fish species extinct in the Delta.”

Birmingham brought one panel discussion to a rousing conclusion after Acree stated the argument of fish vs. farmers is a false premise, and that the ESA “was to protect ourselves from ourselves; we need fresh water for fish and farmers.”

Birmingham said: “You’re wrong. You’re just plain wrong. As the Endangered Species Act is being imposed, there is no consideration for people. Protecting these fish is a very laudable goal but the human species has to be part of it.”