Dry Year Scenario Gets A Review By State Agencies 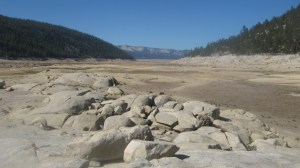 U.S. Bureau of Reclamation / David Woolley
This current scene in the mostly dried up bed of Edison Lake in Fresno County could be more common in reservoirs around the state if 2014 is also a drought year.

The potential of a third consecutive dry year’s impacts around the state has been given a going over by a pair of state boards with a considerable amount of agricultural industry input.
State Board of Food and Agriculture and California Water Commission members heard growers and water managers explain how their respective operations have adapted to survive the past two dry years and what could be done by state officials to help them if 2014 proves to be equally as dry – or worse.
VARIETY OF SUGGESTIONS
Speakers suggested water management improvements ranging from expedited water transfers to improvements in state water conveyance systems, the Association of California Water Agencies reported.
“What California grows is what the world is looking for…,” said Craig McNamara, chair of the Board of Food and Agriculture. “But if we don’t have water we can’t continue this tremendous record of achievement.”
California Farm Water Coalition Executive Director Mike Wade said growers have invested heavily in recent years in water use efficiency changes but are still sustaining severe impacts from water cutbacks – whether due to drought or pumping restrictions that are harming the state’s economy.
“When we think about water supply reliability for agriculture, we need to think of the jobs that go beyond the farm,” Wade said.
Several expressed frustration with fisheries agencies over biological opinions calling for pumping restrictions to help fish species, a situation that this year resulted in some 800,000 acre-feet of water being allowed by the government to flow to the ocean instead of being pumped south from the Delta to San Luis Reservoir in what turned out to be a severe drought year.
“There is a need for statewide solutions,” said ACWA President Randy Record. “Delta solutions are more likely to succeed as part of a statewide action plan.”
DWR PREPARATIONS
Meanwhile, the California Department of Water Resources is preparing for the possibility that 2014 could be a third consecutive dry year.
Water year 2012 ranked as the 25th driest year in terms of statewide runoff, based on a measured record of 112 years. Good reservoir and groundwater basin storage from a wet 2011 lessened impacts of dry conditions. That was not true in water year 2013, which ends on September 30, when record dry conditions from January through May occurred.
“If 2014 is dry, its impacts are expected to be more widely felt due to reduced carry-over storage statewide,” a statement from DWR said.
“While we hope that water year 2014 will mark a return to better water supply conditions, we must be prepared for the possibility of another dry year,” said DWR Director Mark Cowin.
“Dry conditions are a recurring feature of California’s hydrologic cycle and lessons learned from responses to previous dry periods have improved our ability to be ready in the future.”