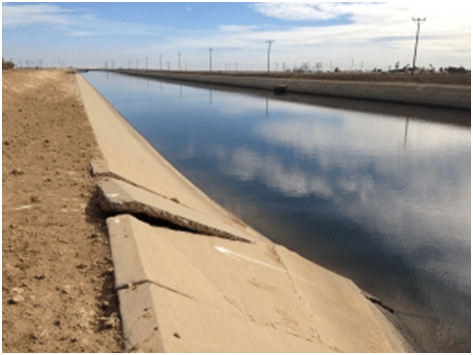 Subsidence is suspected of being the culprit in this liner failure along the Delta-Mendota Canal in the western San Joaquin Valley.
U.S. Bureau of Reclamation

Hydrologists have found that some of the fastest rates of land subsidence ever recorded in the San Joaquin Valley are occurring on the West Side northeast of Dos Palos.
The United States Geological Survey for the past four years has been conducting a subsidence effects study for the area surrounding the Delta-Mendota Canal on behalf of the U.S. Bureau of Reclamation. Using satellite-based radar to measure changes in land surface elevation, the USGS found a “very large subsidence bowl” in the region. The most severe subsidence, nearly a foot per year between 2008-10, was found 15 miles northeast of the canal between the Eastside Bypass and San Joaquin River between Dos Palos and El Nido.
Included in the subsidence region is a portion of the San Joaquin River, currently the subject of a major fishery habitat restoration program. Flood flows in the river and East Side Bypass are also affected.
The researchers discovered that a total 1,200 square miles near the Delta Mendota Canal was impacted by at least one inch of subsidence between 2003-08.
Measured rates of maximum subsidence are similar to what occurred in the 1950s and ‘60s before the California Aqueduct went into service and reduced demand for local groundwater. Increased groundwater pumping due to drought and reduced surface water deliveries is thought to be the cause of the subsidence in recent years. Chase Hurley, San Luis Canal Company General Manager, said the company’s diversion facility – Sack Dam – on the San Joaquin River has sunk 6-8 inches.
Subsidence in the past has caused problems in portions of the valley’s East Side and has constrained the Friant-Kern Canal’s conveyance capacity in a few areas.