Expansion Gets Study By Bureau 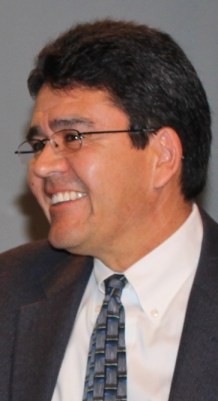 San Luis Reservoir’s capacity and project yield could be given modest increases but the greatest benefit of raising B.F. Sisk-San Luis Dam could be improvements to its seismic safety.
A U.S. Bureau of Reclamation appraisal report appears to find the expansion project would be possible but at a cost of at least $360 million and with the biggest winner possibly being the dam itself. A fault line runs through the reservoir, creating earthquake damage concerns.
SUPPLY AID?
The study was launched last summer and was announced – with considerable surprise – by Commissioner of Reclamation Michael Connor during a Fresno water forum with an eye to eventually helping improve water supplies to users for whom environmental and drought-caused operating constraints and supply curtailments have been the rule for years.
Forty-five year old San Luis Reservoir, an off-stream storage facility west of Los Banos, is shared by the federal Central Valley Project and State Water Project.
Along with supply issues, algae has long been a problem with very low storage, adversely affecting quality of water discharged to the Santa Clara Valley Water District, an urban user in the Bay Area. A report process launched in 2001 identified raising the dam as an alternative.
The latest report finds that dam seismic safety concerns identified in a 2006 Reclamation study could be addressed by enlarging the dam embankment and abutments and shoring up the earth-fill structure. Modifications to intake towers, a spillway and access bridge would also be required. They have been found to be technically feasible to construct.
The Bureau says capacity of the existing 2.04 million acre-foot reservoir could be increased by 130,000 acre-feet (6%) by raising the surface 10 feet and dam height 20 feet, which could yield 43,000 acre-feet of additional average Delta exports.