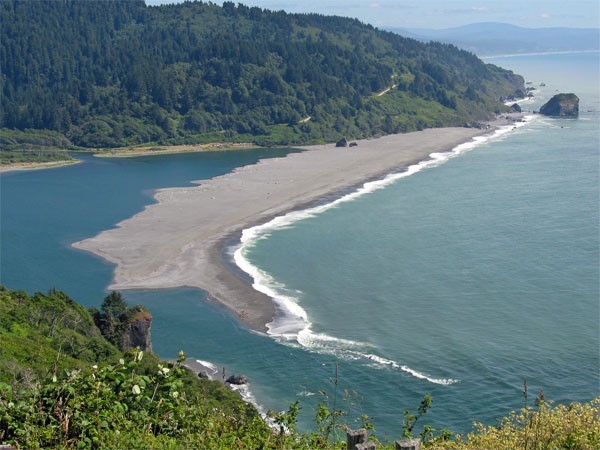 Far from Central California but holding a major key to Central Valley Project water deliveries, the Klamath River flows out its mouth and into the Pacific Ocean in Del Norte County. The Friant Water Authority and many other valley water agencies have objected strenuously to the Bureau of Reclamation’s decision to release CVP water down the Trinity River to presumptively help Klamath River salmon survive this year’s drought conditions.

Action by the Interior Department and U.S. Bureau of Reclamation to release Central Valley Project water in an attempt to aid survival of lower Klamath River salmon is being widely criticized by the Friant Water Authority and other CVP agencies.
Westlands Water District and the San Luis & Delta-Mendota Water Authority, which deliver agricultural water in the western San Joaquin Valley, sought a temporary injunction in U.S. District Court in Fresno to halt the releases but that motion was denied August 27 by U.S. District Judge Lawrence O’Neill.

Reclamation said August 22 it would begin the extra releases of 500 cubic feet per second two days later from a Trinity River reservoir to supplement lower Klamath River flows “to help protect the returning run of adult Chinook salmon.”
Ronald D. Jacobsma, Friant Water Authority General Manager, called the action “a speculative benefit to a fish population in the Klamath river system, which is outside of the CVP.
Jacobsma said the determination “seemingly disregards the serious social and environmental consequences this policy decision will have in the Central Valley. This wholly unacceptable action is beyond inflammatory to the Friant Water Authority, its member agencies, the Friant Division’s small family farmers and growers, the cities that are dependent on Friant water, and the other water users who pay for the operation of the CVP’s infrastructure and have been denied any water supply allocation this year.”

NO WORD ON MAKEUPS

CVP water and power contractors are also still waiting to hear how the lost water supplies and power generation – from this year and last – are to be made up by Reclamation.
“Reclamation has now chosen to take emergency actions to allow for releases from the Trinity River to the Klamath River system even though last spring Reclamation steadfastly refused to take emergency actions to avoid the known water supply impacts of regulatory requirements imposed on CVP operations to the people of the valley,” Jacobsma said.
“This discretionary action appears to be inconsistent with Reclamation’s contractual obligations to its CVP contractors.”

He said CVP water users requested releases from Lake Shasta this summer to meet critical water needs, including water for the San Joaquin River Exchange Contractors that might have resulted in at least very limited project water to be made available to Friant Division contractors who instead are receiving no CVP supplies at all.
“Reclamation informed the water users that flows and temperature requirements for Sacramento River salmon precluded such releases,” said Jacobsma. “Now it appears such water is available to move to another river system without impact. That is inconsistent on its face.
“As a result, a Central Valley economic catastrophe continues to unfold as fields are fallowed, orchards are torn out, irrigation and domestic wells are going dry and small family farms face financial hardship. Social and environmental impacts such as increased risk of valley fever, loss of honeybee colonies and diminished air quality due to topsoil loss, are also occurring.”

Reclamation’s Mid-Pacific Regional Director, David Murillo, said, “We have determined that unprecedented conditions over the past few weeks in the lower Klamath River require us to take emergency measures to help reduce the potential for a large-scale fish die-off.”
Murillo said several factors were the basis for deciding to provide emergency augmentation flows, which were initially increased from Lewiston Dam August 23 from 450 c.f.s. to 950 c.f.s. to achieve a flow rate of 2,500 c.f.s. in the lower Klamath River.
“We fully recognize that during this prolonged severe drought, every acre-foot of water is extremely valuable, and we are making every effort to conserve water released for fish health purposes to reduce hardships wherever possible,” said Murillo.

USBR officials have told contractors to expect some 25,000 acre-feet of CVP water to go down the Trinity and Klamath rivers during the first month of releases. CVP power generation losses of 27,000 kilowatt hours are likely. “This water and power would be lost to CVP uses forever,” Jacobsma said.
“Again this year, the fishery water management plan for the Trinity River – largest tributary of the Klamath River and an important source of CVP water – did not include contingency water for fall flow requirements,” he said. “CVP agricultural and urban contractors efficiently and effectively manage water supply allocations whereas it appears environmental water management is not held to the same level of accountability.”
He pointed out that Reclamation has used emergency procedures under the National Environmental Policy Act for this proposal “but refused to use those procedures this spring when dealing with water operations and water supplies to CVP contractors.”

In an earlier letter as Reclamation was considering making the releases, the Delta Mendota, Friant and Tehama-Colusa water authorities questioned “the scientific basis, necessity and benefit of the proposed releases” and said they are highly uncertain and speculative.
The three agencies pointed out a lower Klamath River fish die-off occurred only in 2002. “The historical record overall does not support a conclusion that flow of 2,500 c.f.s. or more is necessary to avoid a fish die-off,” the letter said. “Since 1970, monthly average flows in the lower Klamath River in August or September were significantly below 2,500 c.f.s. in 1973, 1977, 1988, 1991, 1992 and 1994, and no fish die-off occurred in those years. … The 2,500 c.f.s. flow target is arbitrary and lacks scientific or empirical support as well.”
The user agencies asserted that any problem with lower Klamath River flows is not the CVP’s fault. “It is inequitable, and indeed unlawful, for Reclamation to require CVP water and power users to bear the cost of mitigating a problem the CVP is not causing,” the letter said.

“We need common-sense water management and efficiency to be applied to all environmental uses,” said Jacobsma. “Poor decisions such as this have caused the Friant Division to this year receive 0% of its contract supply for the first time in more than 60 years.”
He said the situation is among the reasons for “the need for the House-Senate conference now under way in Congress to reconcile the bills each house has passed into one measure that truly restores balance to Central Valley Project operations. Federal agencies cannot continue to ignore the known damage they are causing to the people, economy and environment of the Central Valley.”