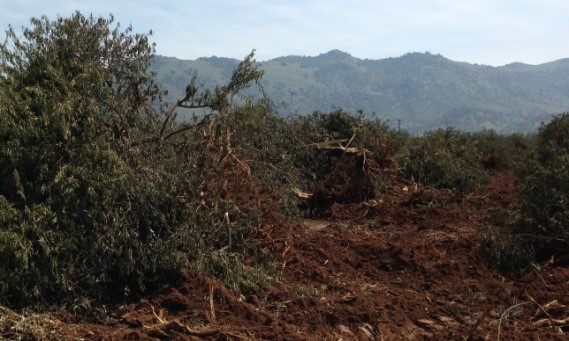 Economic losses in the billions of dollars are looming with the promise of a financial and social calamity along the southern San Joaquin Valley’s East Side as a result of the Friant Division’s zero allocation of Central Valley Project water.
At the same time, even as preparations continue for the first-ever “call” on Friant water to supply the San Joaquin River Exchange Contractors and honor their historic river water rights, a full-court press continues in search of an emergency remedy.
Those all-out efforts are being made to frame a solution that would provide at least minimal water availability for Friant growers, many of whom are now watching permanent plants wilt and die while others are facing the same fate unless some water supplies are made available soon.
“There is no indication that the water pumping operations this year are harming the fish in any significant manner, but we haven’t yet convinced state and federal agencies to make the necessary adjustments to their regulations,” said Friant Water Authority General Manager Ronald D. Jacobsma. “We are not that far away from a solution and it wouldn’t take much to reach it.”
“We are also discussing possible timing, magnitude and means of delivery for any call on Friant by the Exchange Contractors, in the unfortunate event it comes to that,” Jacobsma added.
“We’re trying to get some water available to Friant contractors soon and build some certainty with respect to an allocation to Friant, particularly as to summer supplies. We have emphasized to the Bureau of Reclamation we need to move quickly as growers have already been making hard decisions and more will be made every passing day.”
A key goal is to persuade Reclamation to make available some 300,000 acre-feet of water now stored in Lake Shasta for use by the Exchange Contractors, boosting their supply from 40% to their contract minimum of 75%.
That in turn would make it possible for the Friant Division to begin accumulating at least a small supply out of San Joaquin River runoff and upstream power company releases. The Friant Water Authority has been working very closely with the Exchange Contractors. “We sincerely appreciate their cooperation,” Jacobsma said.
SALMON WATER
There has continued to be a major roadblock.
National Marine Fisheries Service officials this spring have imposed what Friant Water Authority General Counsel Jennifer T. Buckman states is “the unprecedented withholding of water from the senior water rights holders to sustain a cold water pool for salmonids.”
As of now, there is one million acre-feet more storage in Northern California’s CVP and State Water Project reservoirs this year than there was in critically dry 1977, a drought year in which all south-of-Delta CVP and SWP contractors, including Friant, received enough water to avoid disaster.
Salmon protection is the key fishery player this year. The USFWS reports there are no significant problems with endangered Delta smelt.
NEW PLAN 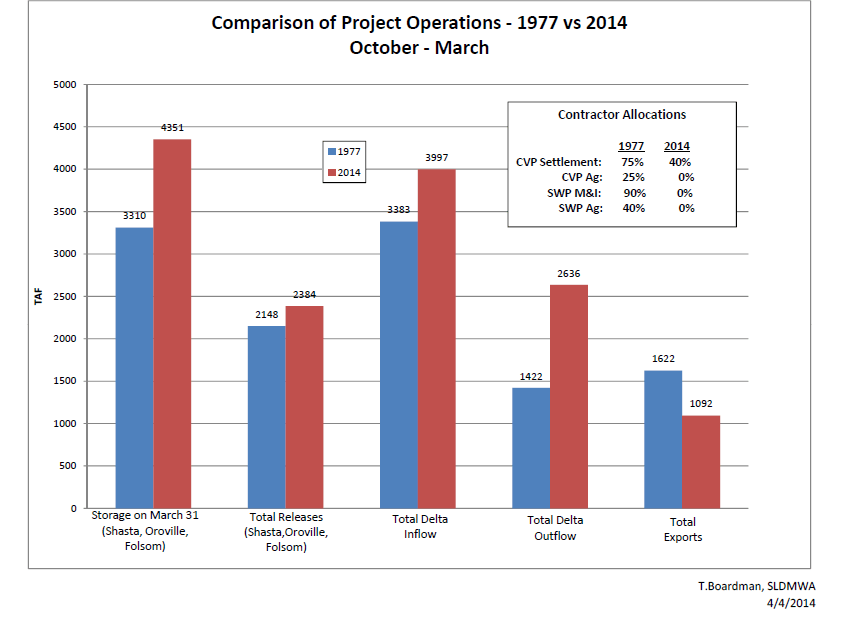 Meanwhile, a new Delta drought operations plan – or at least part of one – was announced April 18. It caused a stir by increasing the State Water Project’s allocation from zero to 5%, available after September 1, to aid in alleviating low point water quality conditions in San Luis Reservoir.
There were also supply increases for Sacramento River settlement contractors and north-of-Delta refuges, from 40% to 75%.
However, the Exchange Contractor and Friant Division operations plan was not expected to be decided until after press time (April 22). The FWA and Exchange Contractors are working closely with the U.S. Bureau of Reclamation on this plan.
While the increase in SWP supplies may add some flexibility to the system to accommodate water transfers, FWA continues to press that the senior water rights of the Exchange Contractors need to be honored before supplies are made available to others.
Governor Brown’s administration reported April 18 that additional actions and activities are under way to facilitate transfers. “Even modest water supply improvement allows for additional water management activities,” Jacobsma said.
MISSED OPPORTUNITIES
Jacobsma laid out Friant’s supply dilemma and concerns in dealing with the NMFS regulatory requirements during a telephone conversation with Deputy Interior Secretary Michael Connor and Assistant Secretary of Commerce for Conservation and Management Dr. Mark Schaefer.
Schaefer is responsible for oceans and fisheries activities at the National Oceanic and Atmospheric Administration, which oversees NMFS’s activities associated with endangered Chinook salmon.
“I told them we think some opportunities were missed in failing to capture and pump some of what storm runoff there has been in the Delta,” Jacobsma said. He told Schaefer that water users and their agencies don’t understand why the government is holding so much water in upstream reservoirs. “We asked Dr. Schaefer to ask his staff what the impacts on fish would be to release 300,000 acre-feet for the Exchange Contractors and he agreed to inquire.”
“We are so close to avoiding a catastrophe if we can get that 300,000 acre-feet moved through the Delta over the summer,” Jacobsma said. “It could make a $3 billion difference.”
That $3 billion is just the potential loss for citrus only – over a five year period – estimated by California Citrus Mutual, based on a continued zero Friant water allocation. The figure includes loss of income, removal of dead trees, costs of replanting, and cultural costs.
Losses in other commodities and residual losses to other businesses and government agencies have not been estimated. Nor has there yet been an estimate of how many jobs stand to be lost along the East Side this year without water.

Contrasting conditions in adjoining orange groves in which irrigation has been possible and where water is not available are increasingly evident in Friant Division districts along the foothills where many irrigated farms are totally dependent upon surface water due to a lack of groundwater. With no Friant water allocation available, many trees are likely to be doomed. Some groves are already being pulled out.