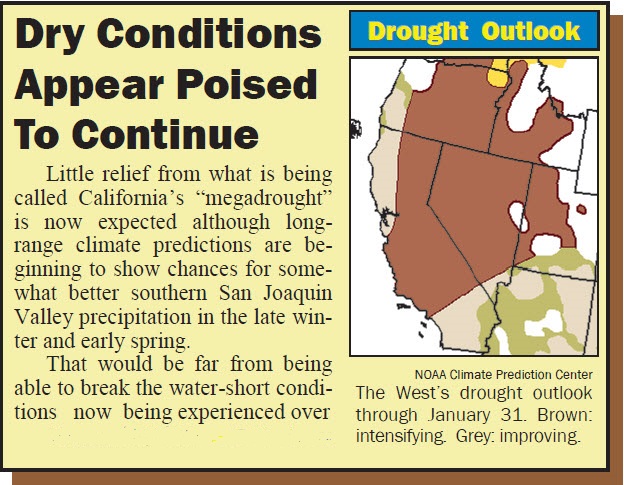 Little relief from what is being called California’s “megadrought” is now expected although long-range climate predictions are beginning to show chances for somewhat better southern San Joaquin Valley precipitation in the late winter and early spring.

That would be far from being able to break the water-short conditions now being experienced over much of the state. Plus, the latest National Weather Service Climate Prediction Center long-range outlooks are showing precipitation probabilities uncomfortably close to what could just as easily be a fourth straight year of below average Central California rain and snow.
That is reflected in a National Oceanic and Atmospheric Administration (NOAA) report earlier this month that predicts improving drought conditions in only about a third of California with all of the Central Valley continuing to experience intensifying drought conditions.

Above average winter and spring temperatures for the entire state, which could mean less of a snowpack than normal, are being predicted.
Even more ominously for California’s bigger water supply picture, the winter-spring outlooks for Northern California precipitation continue to hedge bets, predicting “equal chances” of below- or above-average rain and snow in the region which generates water for millions of users through Delta pumping.
Friant water users rely indirectly upon the availability of north state water because it is the source of the substitute supply delivered from the Delta to the Exchange Contractors, the San Joaquin River’s historic water rights holders. This year, for the first time, the Exchange Contractors were supplied in part with Friant water releases, and Friant users had no project water at all.

The first three drought years added up to the driest-ever three-year period in California’s history.
State Climatologist Mike Anderson says California would need to receive 150% of its normal precipitation to recover from this drought by September 2015. No long-range forecast sees that happening.
“California is now extremely vulnerable to water shortages,” said Kevin Werner, National Weather Service Western Regional Climate Services Director. “The situation is unlikely to change even if we get an average winter.”
He noted the three-year drought now under way is the driest ever recorded in the state.
University of California, Davis, researchers caution Californians and their water managers to not use mere hopes for wet weather as a strategy.
“During a severe drought, water managers and regulators must balance water deliveries in the current year against saving water for unknown conditions in coming years,” a UC Davis study said. “It is statistically likely the drought will continue into next year. We all hope wet weather returns to California soon. But, given the odds, it makes sense to prepare for another dry year.”
By the end of 2014, the drought is expected to cost California’s agricultural industry at least an estimated $2.2 billion in direct and indirect losses.

As for the chance that El Niño, the much-anticipated tropical Pacific water warming condition that occasionally results in California becoming well soaked, might be a meteorological wild card and save the day?
“Don’t count on El Niño for anything,” said Jay Lund, a UC Davis hydrologist.
Bill Patzert, a climatologist at NASA’s Jet Propulsion Laboratory in Pasadena, pointed out, El Niño can come in all sizes and strengths.
“During puny El Niños,” he says, “we had some of the driest winters in the 20th century.”
Forecasts for the coming winter for months had predicted formation of favorable El Niño conditions but have since consistently downgraded the event’s strength.
NOAA’s recent report projects a weak El Niño of the sort that might not bring significant additional rain to California.