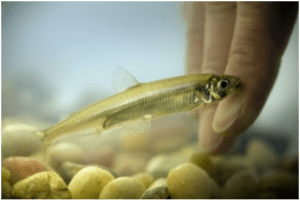 A Delta smelt compared with the size of human fingers

Requests to a federal court by two federal agencies for a great deal more time to revise Delta smelt and salmon biological opinions in the Delta have been met by a judge’s order to provide more detail before any ruling is made.
U.S. District Judge Lawrence J. O’Neill of Fresno wrote that the existing documentation is “as vague as can be imagined about both the agencies’ concerns regarding the existing scientific record and how the [Collaborative Science and Adaptive Management Program-CSAMP] aims to correct those deficiencies.”
O’Neill said the agencies must show how scientific information gained through CSAMP will improve the biological opinions for managing Delta smelt and salmon protected under the Endangered Species Act.

Three-year extensions had been requested by the U.S. Bureau of Reclamation and the U.S. Fish and Wildlife Service in an existing December 2013 deadline for the biological opinions.
Along with incorporating CSAMP findings, the agencies want to include recent changes in another major planning effort, the Bay Delta Conservation Plan. The federal agencies were told to submit additional information to the court by March 1.
The biological opinion under which the agencies are operating has resulted in major pumping restrictions that have reduced the amount of water that can be pumped from the Delta through massive federal and state plants near Tracy into the Delta-Mendota Canal and California Aqueduct for export to Central and Southern California.
The California Farm Water Coalition noted that the most recent round of pumping restrictions began on December 7 and could continue into March. “From the day the restrictions first went into place through January 26, 2013, almost 632,000 acre-feet of water was diverted from farms, families and businesses and allowed to flow to the ocean,” the Coalition reported. “At a replacement cost of $150 per acre-foot, that equates to about $95 million, not to mention the lost economic opportunity of putting that water to work.”
The Coalition said a recent economic analysis puts the overall impact thus far in the billions of dollars. “Allowing another three years of the current biological opinion could be disastrous for California unless changes are made in the interim to a more reasonable, broad-based approach to ecosystem improvements in the Delta,” the Coalition said.

Rewriting of the current biological opinion for Delta smelt came about through a 2010 ruling by Oliver Wanger, then a U.S. District Judge in Fresno. Wanger found Fish and Wildlife did not use the best available science in restricting pumping to protect the smelt and had failed to consider human and other impacts. He set a December 2011 revision deadline but later granted a two-year extension.
The pumps have been blamed nearly exclusively by the environmental community for declines in Delta smelt numbers and salmon population problems. Pumping restrictions have slashed Central Valley Project and State Water Project water supplies at various times over the years, at times leading to extensive fallowing of agricultural lands, and unemployment, economic and social problems, particularly along the San Joaquin Valley’s West Side.
However, a number of other stressors have also been identified. Those include invasive species, predation and disruptions to the food web, and discharges of ammonia from Sacramento’s regional wastewater treatment plant.