Frosting On A Tough Year 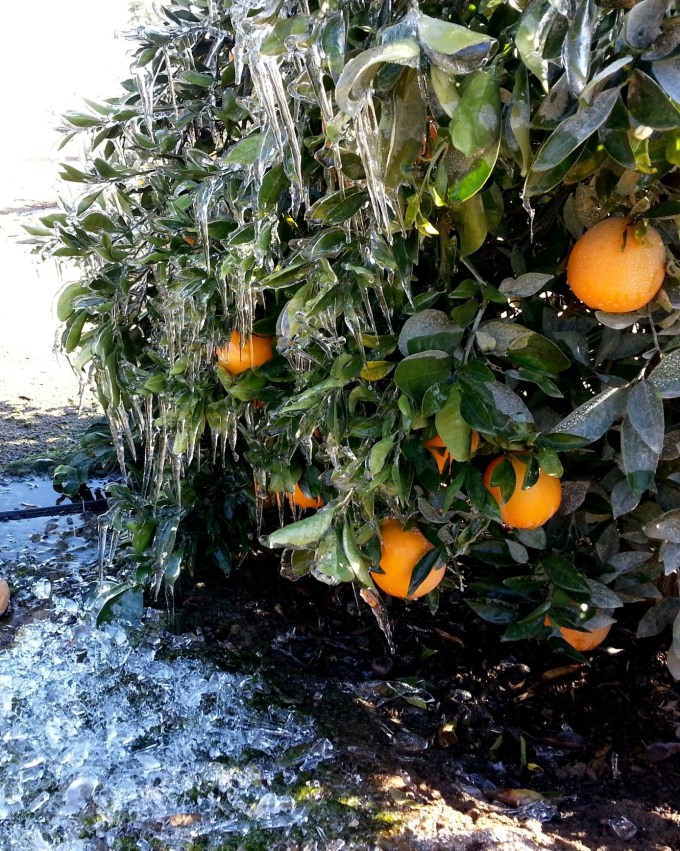 It’s bad enough that Friant Division citrus growers had to run water to battle an extended hard and damaging pre-Christmas freeze but 2013 concluded with calendar year records for minimum precipitation falling all over the valley and state.
Even more troubling, the worst may be yet to come.
FEW INCHES OF 2013 RAIN
Only 2-3½ inches of rain fell during 2013 at many southern San Joaquin Valley locations, well below previous minimum calendar year totals in many places with the long-range forecast for winter and early spring holding little hope for improvement.
Federal Climate Prediction Service forecasters say drought conditions are likely to persist over virtually all of California and much of the Southwest, with drought development likely in other parts of the region, through March, a month that is traditionally near the end of the valley’s rainy season. A state forecast also predicts a third straight dry winter.
That’s bad news for all valley residents and growers, not just those whose plantings, particularly in the citrus industry, sustained damage from several mid-December days with minimum temperatures in the high teens and low 20s. Many growers used Friant water or pumped groundwater for frost protection.
Perhaps worse, the amount of fall and early winter snow that has accumulated to date in the San Joaquin River watershed and elsewhere in the high Sierra Nevada is little more than a frosting. Natural runoff has been negligible and storage in major mountain reservoirs remains low after previous dry water years in 2011-12 and 2012-13.
An initial Friant Division water supply declaration will not be made by the U.S. Bureau of Reclamation until after February 1 snow surveys and runoff predictions.
Just now, there is hardly any snow to melt and run off. As of December 31, automated snow sensors across the San Joaquin River’s watershed were reporting average snowpack water content of just 1.84 inches, 6% of the normal total on April 1 when snow conditions are typically considered to be at their best. At 7,000 feet, Huntington Lake precipitation on December 31 was only 2.31 inches, 16.74 inches below normal.
‘FLEXIBILITY GONE’
“All flexibility is gone from the system after two previous dry years and all the continuing environmental restrictions,” said Ronald D. Jacobsma, Friant Water Authority General Manager. “We’re facing huge economic and social impacts, and not only from natural surface water supply shortages.”
With prospects looking grim for surface water availability, very heavy pressure is being applied to the valley’s groundwater reservoir through pumping.
“Groundwater impacts have become exasperating,” Jacobsma said. “Wells are failing all over the valley and subsidence, particularly on the West Side, is occurring in some places at a foot or more per year.”
He noted that renewed subsidence has not yet become a major problem in the Friant Division, which depends on the conjunctive use of groundwater with surface water provided largely through the Friant-Kern and Madera canals as the Central Valley Project’s designers intended nearly eight decades ago.
“Operations for fish that are providing little to no benefit to the environment are also exasperating,” Jacobsma said.
“There is a real need for federal and state leaders to get the fishery agencies more balanced and less aggressive in trying to protect fisheries and provide balanced beneficial uses of water in the state. We have to figure out the crucial water needs of fish because we’re also trying to figure out what is critical to sustain urban and agricultural water uses.”