Anyone betting on a politician to succeed resigning Interior Secretary Ken Salazar ended up being startled by a long shot who crossed the nomination wire February 6.
President Obama turned to the private sector to nominate Sally Jewell, President and Chief Executive Officer of outdoor and recreational retailer REI, to head Interior, surprising many in government. 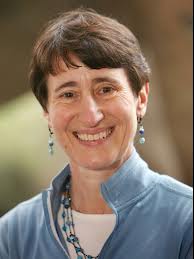 The appointment, which must be confirmed by the Senate, is of great importance to Friant water users.
Although better known for being the steward of the nation’s public lands and resources, the Interior Department oversees the U.S. Bureau of Reclamation. It in turn administers California’s sprawling Center Valley Project, of which the Friant Division is a part.
“Sally Jewell is an interesting choice but she is a virtual unknown on water issues, which is bound to raise concerns among agencies and users relying upon Reclamation,” said Ronald D. Jacobsma, Friant Water Authority General Manager.
Reclamation operates water and power projects in 17 Western states.
Jacobsma noted that Jewell has been labeled both as an influential environmental advocate and strong conservationist voice. Interior also oversees a number of energy-related functions plus the National Parks Service and numerous environmental and conservation programs and agencies.

She is being heralded by some as a business leader whose career has been largely beyond the partisanship and politics of Washington.
The website Politico suggested Jewell’s selection could signal a desire by the White House to centralize more Interior Department decisions since she does not have the political credentials or clout of Salazar, a former U.S. Senator from Colorado.