Low Flows Are Rule In Canals 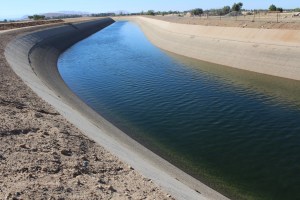 None of it is from this year’s Central Valley Project supply but there is water flowing down the Friant-Kern and Madera canals – just not much.
On June 27, the U.S. Bureau of Reclamation reported it was releasing 266 cubic feet per second from Friant Dam and Millerton Lake into the Friant-Kern Canal, 5% of the canal’s initial capacity of 5,300 c.f.s.
A total of 197 c.f.s. was being released into the smaller Madera Canal.
Through June’s first 27 days, Friant-Kern diversions added up to 10,917 acre-feet while 5,625 acre-feet was used in the Madera Canal.
“These are amounts we’d normally expect to be diverted during a typical winter period, not the first week of summer,” said Ronald D. Jacobsma, Friant Water Authority General Manager.

The flows are partially being supplied from a limited amount of Millerton Lake storage carried over into 2014 by some Friant contractors.
Other canal flows are from releases made possible with the San Joaquin River Exchange Contractors, four western San Joaquin Valley agencies with senior rights to the river. The Exchange Contractors for the first time in the Friant project’s history are receiving San Joaquin River water for diversion because the Bureau of Reclamation assets it is “unable” to meet its obligations to provide a substitute Delta water supply.
Michael Jackson, Reclamation’s area Manager in Fresno, told Friant Water Authority directors June 27 that the Exchange Contractors plan to make available another 13,351 acre-feet to some Friant districts.
A small amount of Millerton Lake water is being released into the canals to cover operational water losses.
There is also some water entering the Friant-Kern Canal downstream from Friant Dam.
The Fresno Irrigation District is providing water under an exchange for “health and safety” uses in the communities of Orange Cove, Lindsay, Strathmore and Terra Bella that rely totally upon Friant water for municipal uses. A limited amount of agricultural water from the banking program is also being utilized.
A total of 12,500 acre-feet of supply was created when interim San Joaquin River Restoration Program flows were suspended earlier in February and were banked for Reclamation by the Fresno Irrigation District.
The banked water is now being retrieved from aquifers under banking percolation basins and is being delivered to some FID growers. In exchange, the program is utilizing a small amount of FID’s Kings River entitlement delivered through the Gould Canal and then pumped into the Friant-Kern Canal.
In addition, many growers have received permission from the Bureau of Reclamation under a quickly-arranged emergency pump-in program to pump water into the Friant-Kern Canal along its upper reaches and convey it downstream for diversion onto other properties they own.