Some of those waving signs during the January 16 State Capitol rally. Approximately 1,000 people took part in the bipartisan event.

Valley voices, including many from the Friant Division, have again been raised on water issues at the State Capitol. They may have been heard.
Within two hours after the crowd of more than 1,000 – including hundreds of farm workers – dispersed following the January 16 rally, Governor Brown let it be known that he would issue what those at the rally had sought – a long-delayed drought declaration. The official announcement was made the following morning.
Those attending also made a major push for enactment of a broadly-based water infrastructure bond as well as pumping of more water from the Delta for use in the valley.
California Latino Water Coalition members organized the rally along with the Nisei Farmers League, League of California Cities Latino Caucus and the NAACP. 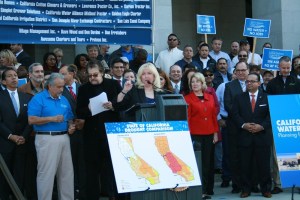 Many of those attending carried signs reading, “No Water, No Jobs” and “No Water, No Future.” The rally was decidedly non-partisan with Republicans and Democrats alike sharing the platform.
“I see farmers, I see farm workers; I see people from urban communities and from rural communities, all here today to send one message: that we need water,” said Assemblyman Henry T. Perea (D-FRESNO). “We need a water bond…that includes [funding for] surface storage so we can store water in wet years so we can use it in weather like this.”
“We’re in the third year of drought,” said Senator Jean Fuller (R-BAKERSFIELD). “We need to increase storage, have a drought emergency declaration that tells everybody we need more resources. Now is the time for passing that bond. Now is the time for water.”
“In California, we’re using a water system that was built 50 years ago for half the population,” said Senator Anthony Cannella (R-CERES). “We need to put a bond before the voters. Not next year, but this year.”
“Additional storage is the key,” said Senator Tom Berryhill, (R-TWAIN HARTE). “This year’s drought simply underscores how critical the situation has become.”
Several mayors and county supervisors from throughout the Central Valley also spoke in support of action to shore up the state’s water system. Following the rally, some participants visited lawmakers in their Capitol offices.