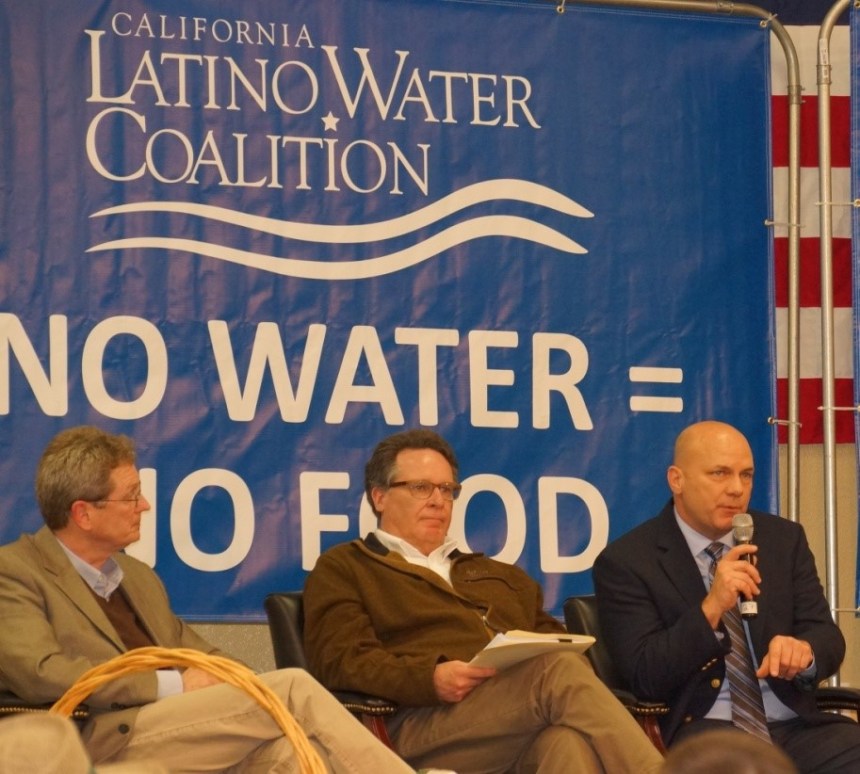 California’s drought and all its related problems were a big topic at the recent World Ag Expo in Tulare.
Between numerous commercial exhibits and demonstrations and a number of special presentations, there was no shortage of information and opinion voiced, including a major forum focused exclusively on the long string of dry weather.
The forum was arranged for the World Ag Expo by the California Latino Water Coalition and attracted an audience of about 120 to the International Agri-Center’s Heritage Complex.
Not surprisingly, what at the time was anticipation – since turned into grim reality by the U.S. Bureau of Reclamation – of a zero water allocation within the Central Valley Project’s Friant Division was a factor much on the minds of those attending and participating.
Ronald D. Jacobsma, Friant Water Authority General Manager, said that since the Friant-Kern Canal’s construction in the late 1940s, Class 1 water allocations have never been below 25%. A zero allocation, he said, is “going to be devastating to the valley.” It’s worse than that, he added. “We start not at zero, but 300,000 acre feet in a hole.” (Please see related story, front page.)

Effects of a lack of surface water supply, both economically and socially, on the many small, farm-oriented communities along the southern San Joaquin Valley, are going to be felt hard, speakers said.
Fresno County Supervisor Phil Larson is all too familiar with such cutbacks. Larson represents a large portion of western Fresno County where CVP water supplies have been constantly curtailed, largely by Delta water export pumping restrictions under the Endangered Species Act, for the better part of two decades.
“When farmers lose water, they lay off people. Farm laborers move away, and they take their children with them,” said Larson. The results are sweeping, including lost and failing businesses, social problems, layoffs from jobs, increased demands on social services and lost tax revenues for all levels of government.
Manuel Cunha Jr., Nisei Farmers League President, cautioned that farm workers will inevitably move to other areas in search of work and many may not later return, adding to the valley’s continuing farm labor problems and concerns.

Also discussed at length were many longer-range California water crisis issues, including a common thread of the need to develop more surface water storage and other infrastructure.
“The biggest threat to farming is the Endangered Species Act,” Larson said. 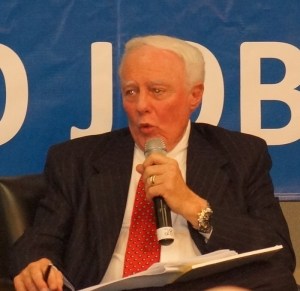 Retired U.S. District Judge Oliver Wanger, who made a number of important water-related decisions during his tenure on the court’s Fresno bench, said the Delta’s problems cannot be repaired because of their complexities. Wanger said the Endangered Species Act’s problems and impacts can only be resolved by Congress.
Thomas Birmingham, Westlands Water District General Manager, expressed hope solutions will emerge from Washington, citing recent consideration and debate over water bills in Congress.
There were calls for fast-tracking development of storage projects such as the San Joaquin River’s proposed Temperance Flat Reservoir.
Mark Watte, a Tulare grower and member of the Friant Water Authority and Kaweah Delta Water Conservation District boards, pointed out the need to supplement Millerton Lake’s small storage with the much larger proposed reservoir to better capture and store big runoff events.