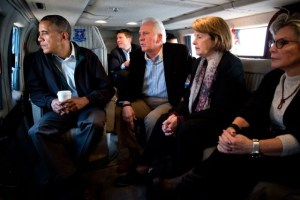 President Obama gets an aerial view from his helicopter of fallowed West Side farmland.

‘NOT A GAME CHANGER’

“For many of us, we weren’t sure what message or assistance would be offered by the President,” Jacobsma said.
“We may have had different hopes and expectations. Most of us certainly didn’t see the visit as a game changer, at least at this stage. The attention to the problem may be helpful. The financial aid will provide some targeted relief but such aid can’t offset the overall ag industry impacts of lost crop production or dead orchards to growers, ag employment and ag related industries.
Jacobsma added that Obama’s “acknowledgement that infrastructure may be part of the solution was encouraging. The limited reference to environmental laws and regulations and impacts to the water supply system was disappointing. The focus on climate change doesn’t provide any immediate or near term assistance, and quite frankly is a bit of a distraction.
“We are probably essentially in the same place as before the visit – squeezing as much out of the system as we can within the current parameters with additional real time modeling and sampling; and hope that the Senate and House legislation can be negotiated in conference into some meaningful assistance for water supplies this year and in the future,” Jacobsma reflected. “And continue to pray for rain and snow.” 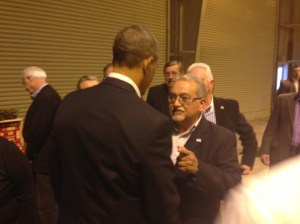 Santoyo, who helps lead the California Latino Water Coalition, said he was pleased that “the President reflected we need to build additional infrastructure to meet the future’s needs. He used the word storage.”
So did Governor Brown. “He said storage in a more positive way than I’ve heard in the past,” Santoyo said.
Jacobsma related that the President “almost bounded in the room when he arrived. He is very charismatic and friendly, individually greeting all the participants and we were able to introduce ourselves and who we represent.”
Obama opened the discussion “saying he was there to listen and he understood the unprecedented drought situation.” Secretary of Agriculture Vilsack, who conducted an hour-long discussion before Obama arrived, asked California Farm Bureau Federation President Paul Wenger to describe the water supply and farm situation. Wenger was followed by Westlands Water District General Manager Tom Birmingham, who talked about the valley’s drought situation and the hundreds of thousands of acres being fallowed or losing permanent crops. A Natural Resources Defense Council representative then made a short statement about environmental needs. “No one else was provided an opportunity to add to the discussion,” Jacobsma said.
After a group photo was taken, however, Santoyo said he took advantage of an opportunity that arose to speak with Obama. “I did have a couple of minutes talking with President, talking specifically about storage needs in the Fresno area at Millerton Lake.”
Joe Del Bosque, who hosted the President on a tour of some of his fallowed Merced County farmland near Nees Avenue and Interstate 5, was also encouraged about the messaging that Obama received. “He was interested in my story,” said Del Bosque, a member of the California Water Commission and California Latino Water Coalition. “We got to talk a little about some of the crops I grow. We don’t just grow food in California, we grow healthy food.” In the roundtable, Del Bosque said, Obama got the message about the impacts that the lack of water is causing on farmers, farm workers and businesses. “He also heard a lot of good information from the water guys on how he can help.” 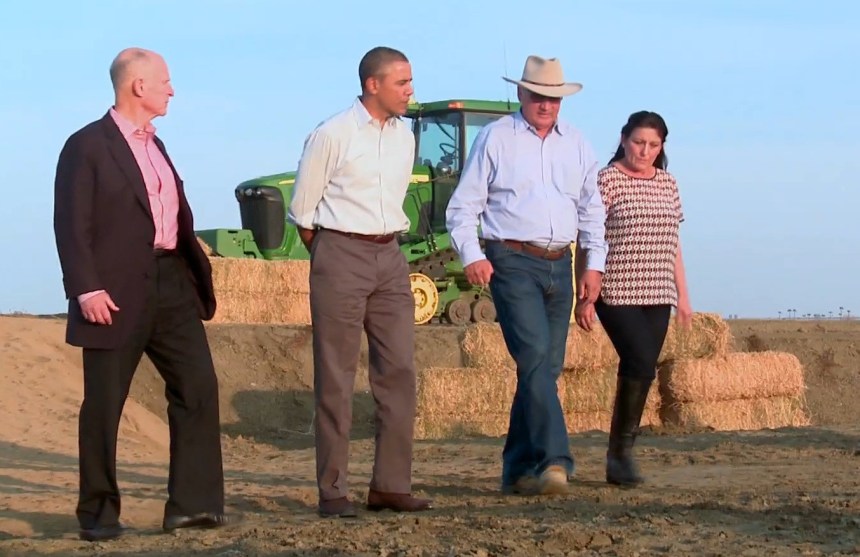 PRESIDENT’S COMMENTS
According to a transcript made available by the White House, Obama’s remarks during the private meeting were similar to what he later told reporters.
“There is a national concern around the drought that is facing California,” Obama said. “…But the truth of the matter is that this is going to be a very challenging situation this year, and frankly, the trend lines are such where it’s going to be a challenging situation for some time to come.
“My goal today and I think my administration’s goal generally is to try to facilitate and work with a whole range of stakeholders at the local level and see how we can find common ground to point to a new direction moving forward. But I will say this: I think there’s a tendency, historically, to think of water as a zero-sum game, that either the agricultural interests are getting it, or urban areas are getting it, north, south. Given what we anticipate to be a significant reduction in the overall amount of water, we’re going to have to figure out how to play a different game. And if the politics are structured in just such a way where everybody is fighting each other and trying to get as much as they can, my suspicion is, is that we’re going to not make much progress – particularly because Jim Costa told me if you want to guarantee yourself a job in California, become a water rights lawyer.
“So what we can’t afford I think is just years of litigation and no real action. And our hope is, is that we can convene a conversation that helps us move forward.”

The earlier roundtable discussion with Secretary Vilsack was much more broadly based had representatives from the Governor, Senators Feinstein and Boxer, and Congressman Costa in attendance. Some 15 agricultural, water, and business representative and one NRDC officials spoke in the hour-long discussion. “Everyone, excepting NRDC, emphasized that additional water supplies and operational changes are the key and a more aggressive operating regime in the Delta to enhance water supplies needs to be pursued,” Jacobsma said.
“It was probably a once in a lifetime experience meeting the President in this format,” Jacobsma added. “I wish he could have participated in the full roundtable discussion. It would have better informed him of the magnitude of the problem and possible solutions.” 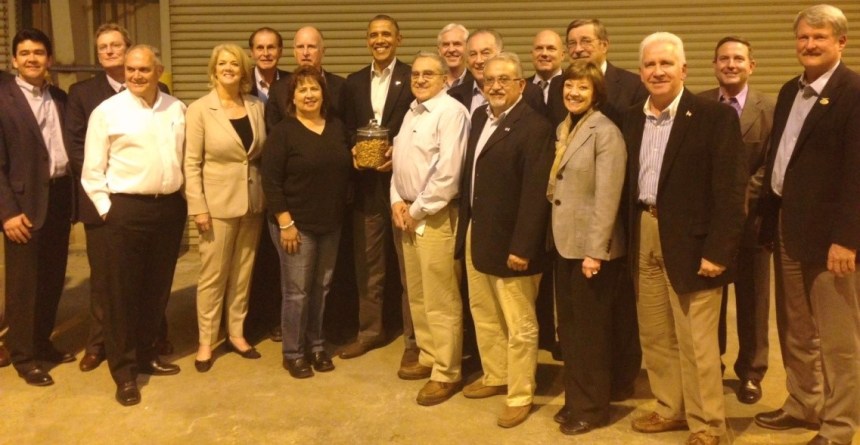 President Barack Obama (holding a jar of nuts that had been presented) is surrounded by those who were invited to attend a town hall type session on California’s drought at a San Luis Water District facility in western Merced County. The Friant Water Authority was represented by General Manager Ronald D. Jacobsma (back row, fourth from right) and Assistant General Manager Mario Santoyo (front row, third from right).