After a decade of effort, California has produced a voter-embraced water bond that will result in real water development. Now, however, what may be the hardest work is just starting.
Voters on November 4 gave broad approval to Proposition 1, the $7.5 billion water bond that this year was re-crafted with nearly unanimous bipartisan Legislative support.
“This is the first water bond in 40 years that will actually produce real water,” said Friant Water Authority Assistant General Manager Mario Santoyo, Executive Director of the California Latino Water Coalition. “Now that we’ve passed the water bond, we need to make sure its funds get to the intended recipients.”
During a news conference November 6 at the Fresno Irrigation District’s campus, Santoyo added, “It’s a major step forward but not the last step forward.”
Clovis City Council member Jose Flores, another Latino Water Coalition member, cautioned the Legislature to “remember that the voters have spoken, that we need more storage.”

Already, Santoyo said, ideas are beginning to be voiced around the state on how to spend the bond’s funding. “Some of what we’re hearing isn’t what was just approved,” Santoyo said.
Particularly vulnerable is the bond’s $2.7 billion in funding for new surface water storage development. Even as the Fresno news conference was taking place, press reports were reporting comments suggesting those funds might be better spent on other projects than new reservoirs such as Temperance Flat northeast of Fresno.
As an example, the Associated Press reported Jay Ziegler of the Nature Conservancy as saying he expects many new ideas to emerge during discussions among state officials and a variety of special interests, including environmentalists.
“We’re hoping to have a genuine dialogue,” he said. “We don’t really know today what the right project mix is and how to optimize the system.”
Lester Snow, California Water Foundation Executive Director, was quoted as saying, “Now that we have the money, the challenge begins of expeditious and effective implementation of the bond.”
More assertive was Adam Scow of Food and Water Watch. He was among those telling Capital Press that they plan to battle politically for spending on what they term more “sustainable” projects, including large-scale recycling, storm water capture, groundwater cleanup and technologies lead to less imported water reliance.

“We’ll fight the dams, we’ll fight the tunnels, we’ll fight public money being used for additional water transfers,” said Scow. “The battle just continues to make sure the funds are in the public interest.”
The “tunnels” Scow mentioned are the proposed twin bores under and through the Delta to convey north state water to pumping plants near Tracy. That proposal and other parts of the Bay Delta Conservation Plan favored by Governor Brown were intentionally left out of Proposition 1.
Temperance Flat Reservoir, which would be located in the upper end of Millerton Lake, would add 1.26 million acre-feet of San Joaquin River storage.
It is squarely in the sights of water storage opponents. So are the proposed Sites Reservoir and enlargement of Lake Shasta and Los Vaqueros Reservoir in Northern California. 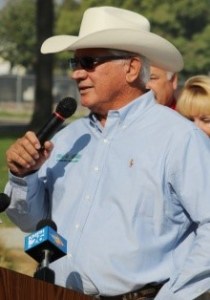 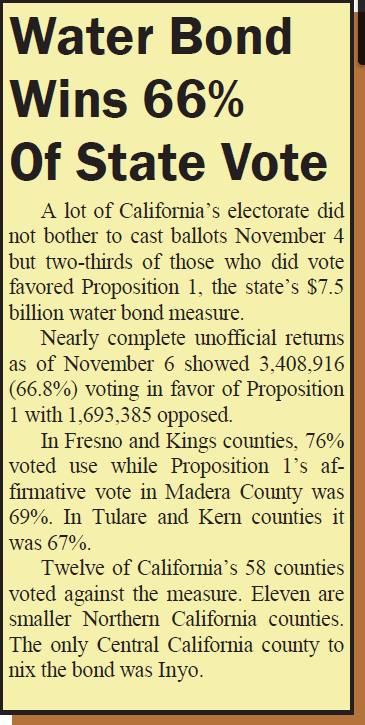 getting those dollars implemented in an appropriate manner that will benefit the entire state, not only the environment.”
Ultimately, the California Water Commission is expected to be the venue where much of the initial debate over the storage funds takes place.
Joe Del Bosque, a member of the Water Commission and Latino Water Coalition, told the Fresno news conference that “the fight continues.”
He pointed out that despite Proposition 1’s passage, impacts of the drought are continuing.

Fresno County Farm Bureau Executive Director Ryan Jacobsen noted, “For the first time in my lifetime California is making a bricks and mortar investment in water.”
He agreed that Election Day “wasn’t the finish line; it was the starting line for what is to come.”
Nisei Farmers League President Manuel Cunha said he expects a fight over how the bond funds are ultimately spent.
“We have to make sure the money is spent as intended,” Cunha said. He called on the Legislature and Attorney General “to step up and defend this when the lawsuits begin on dams.” 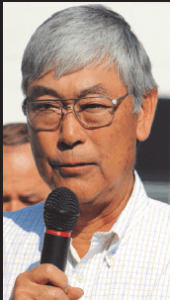 A Tulare County Supervisor, Allen Ishida of Lindsay, said Proposition 1 funding will be an immediate means of funding solutions to the water quality woes plaguing many disadvantaged San Joaquin Valley communities.
Although he agreed that “long-term storage is going to take a while to get done,” Ishida called the bond “the beginning of reliability so we [in the Friant Division] do not get another Zero allocation in the future.”

Governor Brown, who easily won re-election November 4 and was among Proposition 1’s biggest campaigners, said after the election, “Water is fundamental to life itself, to our economy, to our well being. Proposition 1 is about investing in vital resources that make California the state it is.”
California Farm Bureau Federation President Paul Wenger said voters sent a clear message that they want attention to the state’s water system. “We’re hoping that the legislators and Congress will take heed and allow for better management of our current water infrastructure,” said Wenger. 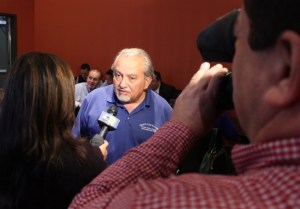 Santoyo, during a Latino Water Coalition Election Night party in Clovis, said, “A lot of us have been working on this for 10 long years. “The water bond was born literally in the Central Valley. Getting the Governor [Arnold Schwarzenegger] here to meet and commit to new storage was a key part of it.”