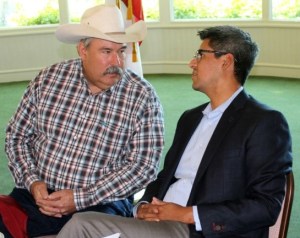 Assemblymen Frank Bigelow (LEFT) and Henry T. Perea discuss the water bond’s many issues before a Fresno meeting July 10 during which many suggestions were made on what a recrafted measure should include.

Legislators are beginning August by going to back to work after a summer recess with some sort of decision likely by the middle of the month on whether or not a revised comprehensive infrastructure water bond will be on the November general election ballot.
The Friant Water Authority – which continues to officially support bond measure enacted in 2009 but twice delayed from voter decisions – remains engaged closely in the issue.
There remain differing versions of water bond proposals on the table. Before the summer recess, intensive bipartisan negotiations took place in an effort to frame a slimmed down but still comprehensive measure. The 2009 bond has been criticized for its bottom line – some $11.14 billion – as well as some of its provisions.

About 50 elected, civic, business and agricultural leaders from the central San Joaquin Valley met in Fresno on July 10 with Assemblymen Henry T. Perea (D-FRESNO) and Frank Bigelow (R-O’NEALS) who have each made an adequate water bond a priority. Both were involved in the bipartisan talks with other lawmakers.
They asked those present and the local governments, agencies, organizations and businesses represented for lists of specific desires on what a revised water bond should include. It is understood that such a list is being finalized.
Heading the suggestions aired during that meeting is a need to provide state bond funding for new surface water storage development. The proposed Temperance Flat Reservoir, which would contain about 1.2 million acre-feet of storage behind a new dam in the upper end of the San Joaquin River’s Millerton Lake, is one storage project that could benefit from such funding.

Friant Water Authority directors remain firm in contending any substitute bond plan have $3 billion in continuous appropriation for storage development and additional funding for related water conveyance.
Friant continues to support adequate funding to help resolve the Delta’s many problems in order to help restore water supply certainty in much of California. Funding for integrated regional water management and assistance to disadvantaged communities to solve their water quality woes, and merits of conservation programs as recycling, water cleanup and desalinization as well as regional projects developing water supplies are also favored by Friant, as was the case in the 2009 bond.