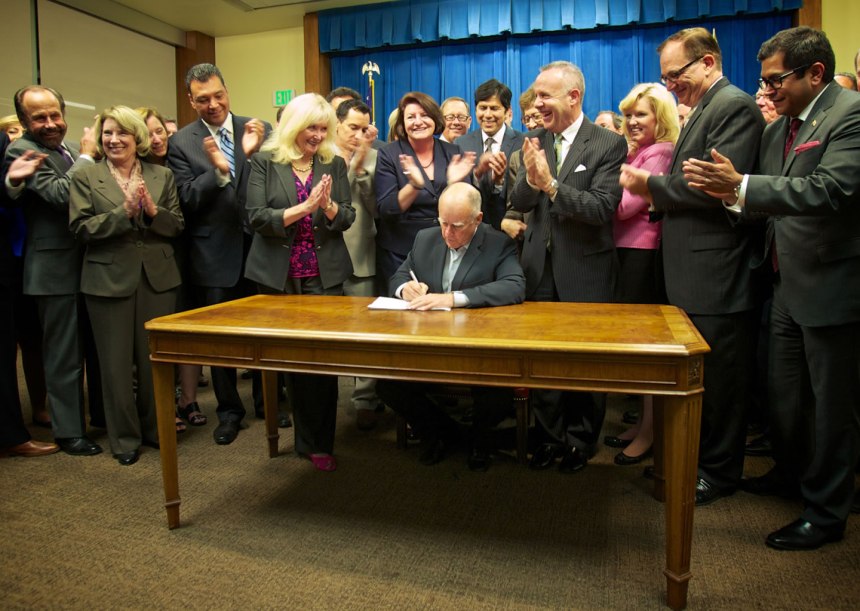 For the second time in five years, an all-out effort by the Friant Water Authority has resulted in legislative approval and a governor’s signature of a comprehensive water 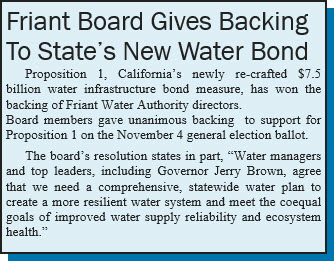 infrastructure bond that includes a significant funding mechanism with which to help develop new California surface water storage facilities.
Friant leaders were involved deeply in the successful effort to frame the $7.5 billion measure, which will go before voters November 4. It would include most of the major infrastructure and related needs that were proposed in an earlier and now re placed bond. That includes $2.7 billion in continuously authorized funding for surface storage. “This is $300 million less than what Friant had sought and what had been included in the old bond,” said Ronald D. Jacobsma, Friant Water Authority General Manager, “but it is enough to effectively do what needs to be done to help make new storage facilities a reality.”
A new San Joaquin River reservoir – Temperance Flat – is a leading candidate to share in the bond funds if they are approved.
PROPOSITION 1The new water bond plan, designated as Proposition 1 on the November general election ballot, is a reduction from $11.14 billion proposed in the 2009 bond that was signed into law by then-Governor Arnold Schwarzenegger. That measure was twice delayed by the Legislature from going before voters, in 2010 and 2012, largely because of the state’s budget crisis.
Governor Jerry Brown signed the new bill August 12, shortly after it was approved 77-2 in the Assembly and 37-0 in the Senate.
“We are very pleased with the action by the Legislature and Governor Brown,” said Jacobsma. “For the better part of the last decade, Friant has been working closely with legislators of both parties in support of a water bond that will result in real water to meet California’s future needs, including surface water storage. We are grateful for this bipartisan action and appreciate the willingness of Democrats and Republicans alike to reach workable compromises that have resulted in what Friant believes is a strong package for voters to consider.”

It wasn’t easy. For months legislators had to hack through competing bills with widely differing provisions and intents as well as a big range in proposed bond values. Plus, Brown until fairly recently did his best to steer clear of the bond debate before proposing his own $6 billion measure, containing $2 billion for storage. That helped spark the final intense rounds of legislative negotiations, much of it on a bipartisan basis, that led to final passage.
A late breakthrough on funding new storage at $2.7 billion proved crucial. “We really have to thank legislative Republicans and valley Democrats who held out, largely at our insistence, at $3 billion as long as possible,” Jacobsma said. “Because of their hard work, the bond amount for storage was trimmed 10% while most other bond components were reduced 30% from the old bond’s provisions.”
Lawmakers, also spurred toward compromise because of worsening effects of California’s drought, were up against the clock. On August 10, a bill was passed authorizing a two day extension of the deadline for printing voter guides. Brown’s signature came at the reset deadline’s wire.
“This bond is a compromise,” said Senator Lois Wolk (D-DAVIS). “No one got everything they wanted. But all of California gets what it needs.” She said the bond’s legislative passage “was a historic moment that demonstrated government, at least here in California, can get things done when partisan politics are set aside.” Jacobsma said the bond proposes funding in a number of areas (please see adjacent listing), including some San Joaquin River Restoration Program elements.
He added, however, “No funding for inter-regional conveyance was provided in the bond. The Governor has apparently committed to support funding for that type of conveyance out of appropriations, which may include integrated regional water management funds.” He said Friant would need to consider possible projects.

New surface water storage is a key bond component. It would receive 36% of the bond funding if voters were to approve. None of California’s five previous water bonds that passed ballot tests contained surface water storage funding.
“While this has been a very long and tough process, this bill meets the needs of the Central Valley,” said Assembly Member Henry T. Perea (D-FRESNO). “I supported this water bond because it works to meet the needs of the entire state. It provides $2.7 billion in surface water storage allowing Temperance Flat to move forward, $520 million for clean drinking water, and funding for Delta sustainability. This option will create a reliable water supply for generations to come.”
Assembly Water, Parks, and Wildlife Committee Vice Chair Frank Bigelow (R-O’NEALS) said Republicans had “made it clear that water storage funding was the most important element of any potential new water bond proposal. … This water bond proposal includes a much-needed down-payment for many vital water storage projects.”
Senate Republican Leader Bob Huff (R-DIAMOND BAR) said the bond would contain “money that will be matched with federal and local funds to build two new reservoirs – one in Northern California and the second [Temperance Flat] on the San Joaquin River in Central California.”
“The severe water shortages we’re currently experiencing result from 30 years of neglecting our water-storage system,” California Farm Bureau Federation President Paul Wenger said. “That neglect is magnified by the drought, and it’s time to reverse that pattern of neglect.”

Opposition to Proposition 1 was sounded quickly. The ballot argument against the measure states in part: “While there are many good things in Proposition 1 – water conservation, efficiency, reuse and recycling as well as restoration of our watersheds – the serious flaws outweigh the benefits. …
“Proposition 1 wrongly focuses on building more dams. More than a third of the $7.5 billion is earmarked for surface storage, which almost certainly will mean new dams, increasing pressure to over pump and divert more water from Northern California rivers… . Proposition l’s new dam projects increase California’s total water supply by as little as 1% while costing nearly $9 billion to building. These dams would not even be usable for decades… .” It was signed by Assembly Member Wesley Chesbro (D-ARCATA); Conner Everts, Executive Director, Southern California Watershed Alliance; and Barbara Barrigan-Parilla, Executive Director, Restore the Delta